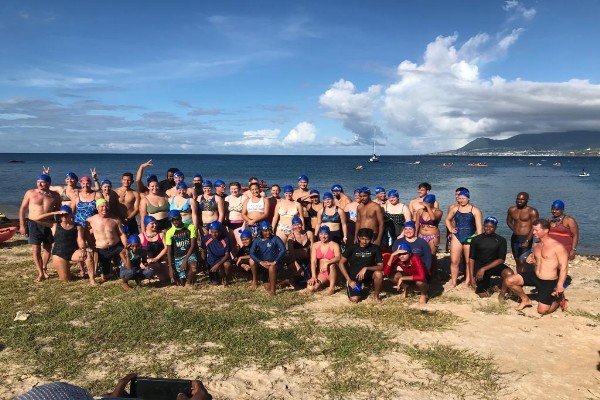 Some 49 St. Kitts and Nevis residents participated in the 1.9 miles swim from Whitehouse Bay (Salt Plage) to South Friars Bay at Shipwreck. 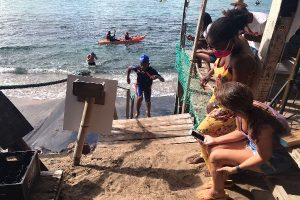 Eleven-year-old Justin Williams from Nevis, one of nine young people (8 boys, 1 girl) under the age of 16, was the first young person to come in, within the top 10 of all swimmers, with a time of 1:02:33. Troy Nisbett of St. Kitts was the second young person.

WINN got the chance to speak with the first male and female to pass the finish line.

Nin Cameron Blake was the first adult male swimmer to come in with a time of 49 minutes and said the conditions for the swim were perfect.

“It was great. It was good, good conditions out there, pretty flat, a little bit choppy at some points, but it was nice. Saw a few fish, saw lots of stingrays, nothing too extravagant but within the normal, I don’t even know. But yeah, it was nice and refreshing.”

Blake, a veteran of the event, said it was his sixth or seventh year participating in the swim. 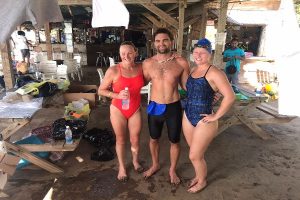 The first female swimmer and the second person to finish the race was Jane Hansom, in just over 51 minutes.

“It was fabulous, it was absolutely beautiful; [the] conditions were perfect, the visibility was great, saw a turtle, a huge stingray, it was awesome. It was nice chasing Nin,” said Hansom, who is a seasoned Triathlete out of London.

Many of the participants did reflect on one challenging aspect of the swim, judging how close they should have swum to the coast.

All participants arrived safely and were treated to a luncheon at Shipwreck after the race.

The race was also a fundraiser, which raised EC$1,588, for young people of the Federation to participate in the St. Kitts Yacht Club’s weekend sailing and swimming programs held each Saturday afternoon on the Strip at Frigate Bay.

Below is the breakdown of the race: