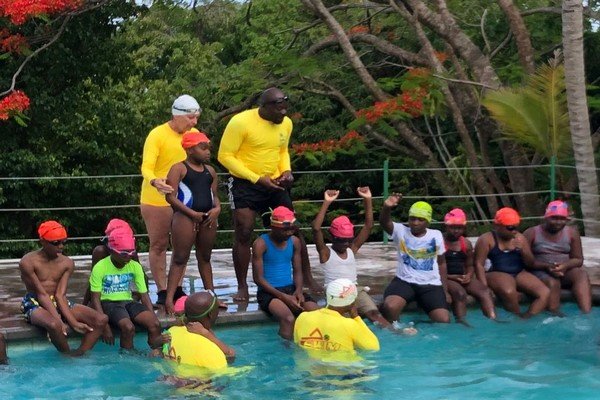 Dubbed ‘Swim to Win’, the three swim camps, to be conducted this summer are the brainchild of Premier Mark Brantley, and are described as the first steps to formally introducing swimming to schools on the island.

Last August, Premier Brantley announced the establishment of the camps, as part of activities marking the 50th anniversary of the sinking of the MS Christena ferry.

Described as the Christena Disaster, the death of a reported 233 passengers resulted in fear of the sea and a decline in people heading into the water.

A total of three weeks of Swim Camps will be conducted by the Swim to Win program this summer.

Robert Liddie, a Special Olympics athlete and gold medal winner from Nevis (OWS, cycling and triathlon), who first learned to swim in the Eden Life pool over 25 years ago, gave a swimming demonstration to the students on the final day of Camp.

He also assisted Minister of Sports Eric Evelyn with presenting medals to the participants.