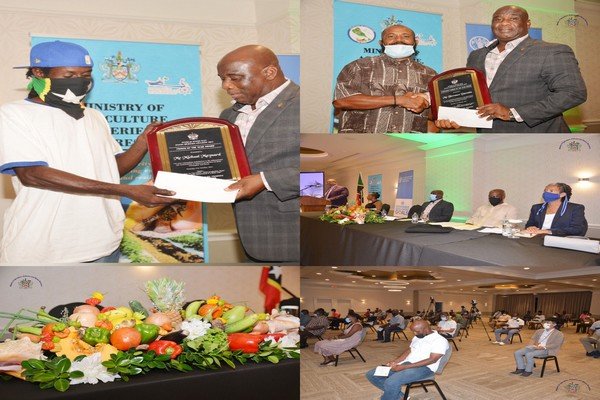 The fishers and farmers were referred to as ‘Food Heroes’ persevered through an extremely
challenging pandemic which affected agricultural and fisheries sectors globally.

In his feature presentation, Minister of Agriculture, Fisheries and Marine Resources, Hon.
Alexis Jeffers highlighted the importance of food security and sustainability.

Awards were then presented in three categories; Crop division, Livestock division and
Fisheries.

As the highlight of the ceremony, Michael Maynard was announced overall Fisher of the
Year, Terrance Decosta- Livestock Farmer of the Year and Calvin Percival- Crop Farmer of
the Year.

The prize giving ceremony formed part of the Ministry of Agriculture’s World Food Day
Week of Activities which were held under the theme, “Our actions are our future. Better
production, better nutrition, a better environment and a better life”.