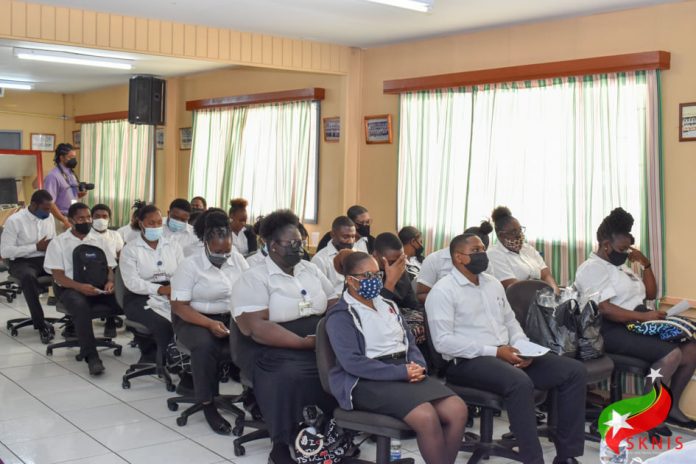 St. Kitts and Nevis (WINN): A Passing Out Ceremony was held on Tuesday morning (February 15) at the Basseterre Police Training Complex, where 23 individuals who are enrolled in the Basic Constable Training Course 2022 completed the first phase of their training.

During the ceremony, the SCASPA Security Manager Mr. Louis Hendrickson said the Basic Constable Training Course exposed security trainees to various disciplines so that they are better equipped to effectively function within the workplace. He added that the training course also formed a vital part of the SCASPA’s Port Security Reformation Plan – a 3-tier process for all new and existing Security Officers at the Authority.

Hendrickson shared some of the ways in which the course will impact the trainees.

“This training we believe would help not only in the mental and physical building of our students but also help in building character. This will help persons to be able to contribute valuably to the organisation and to the country on a whole.”

The Security Manager advised the trainees to practise what they have learned without fear and favour. He reminded them that they will be placed on the frontlines, not only as security officers, but as ambassadors. Hendrickson warned that Security is a serious business, more so at the entrances of the country, so no matter where they are placed, each security officer must carry out their work effectively.

Giving remarks at the ceremony, Ms. Shauna Edwards of the Royal St. Christopher and Nevis Police Force gave an overview of the training course. She said, during the training, report writing, station diary and port procedures were conducted and the SCASPA Code of discipline was also formally introduced. Other areas of training included Customer Service training, the SCASPA Act, and training on the International Ship and Port Facility Security (ISPS) Code amongst others. The practical aspects ranged from conducting searches, how to give evidence, self defence and effecting an arrest.

Inspector Edwards indicated that the training received will be useful for the officers as they discharge their duties, whilst respecting the law and the Constitution of the Federation.

According to the Inspector, a written assessment was done to test the participants’ level of retention and comprehension. She said 78 percent of the trainees passed the course. Two trainees, Natasha Pierre and Diana Laplace passed with a score of above 80 percent.

Inspector Hendrickson reminded the participants that their journey has just begun, as they have only completed the first phase of the 3 phase course.