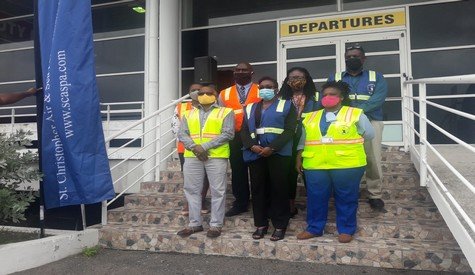 St Kitts and Nevis (WINN): The St. Christopher and Nevis Air and Seaport Authority’s enhancement project at the Robert L Bradshaw International Airport is expected to be completed within two months, according to the Tourism Minister Lindsay Grant.

Phase 1, completed in April 2019, consisted of the resurfacing of runways B and C. Solar lights were also installed on the runway and on all taxiways.

“This work is expected to be completed in two months… ” Grant told reporters at a recent briefing at the airport.

The resurfacing of the apron would be done in Phase 3 but no date for that work has been announced.

“It is important to note that the cost of Phase One and Phase Two of the Airport Infrastructure Rehabilitation Project is $60.7 million. Of that amount, $24.5 million was financed by SCASPA using their internal funds and the remaining $36.2 million financed by loan funding.

The minister also said that a new elevator and baggage carousel were installed and a new conveyer belt commissioned.

SCASPA is also implementing the relevant COVID-19 regulations for the arrival and departure of passengers.