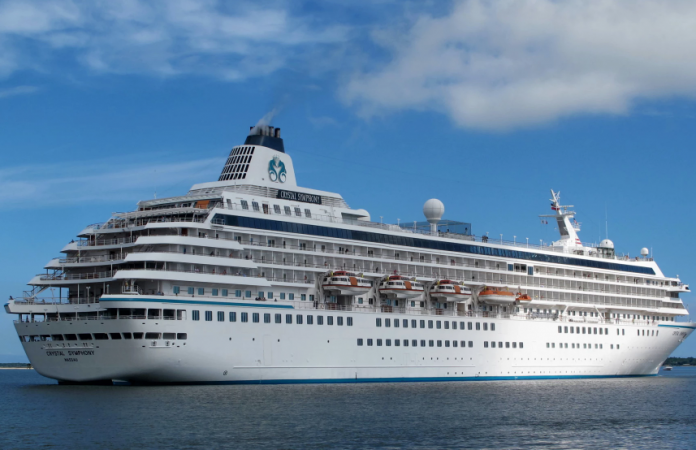 (NPR) A luxury cruise ship that was scheduled to dock in Miami this past weekend made a surprise detour to the Bahamas after a U.S. judge ordered it to be seized as part of a lawsuit over unpaid fuel.

The Crystal Symphony was supposed to wrap up its Caribbean voyage in Miami on Saturday, according to operator Crystal Cruises. The online tracker Cruise Mapper clocked it Monday afternoon local time at a port in Bimini, the part of the Bahamas closest to the mainland U.S.

The change in plans appears to have been triggered by a lawsuit filed against the cruise line in a Miami federal court on Wednesday.

Peninsula Petroleum Far East sued Crystal Cruises and Star Cruises (which are both owned by Genting Hong Kong) and the Crystal Symphony ship, accusing the vessel and its managers of breach of maritime contract and asking the court to take it into custody. The six-page filing says the entities owe a combined $4.6 million in fuel. NPR has reached out to Crystal Cruises for comment.

Crystal Cruises announced that same day that it would suspend operations for its ocean and expedition ships through the end of April and for its river cruises through the end of May, saying the decision would give the company’s management team time to evaluate the state of business and potential future options.

“This was an extremely difficult decision but a prudent one given the current business environment and recent developments with our parent company, Genting Hong Kong,” said Jack Anderson, Crystal’s president.

It said the three ships currently in operation — the Crystal Symphony, another in the Caribbean and one in Antarctica — would complete their voyages by the beginning of February.

District Judge Darrin Gayles issued a warrant for the ship’s arrest on Thursday. That’s the process by which a U.S. marshal boards the ship and physically takes charge of it, putting it in the possession and jurisdiction of the court.

It is not clear how many passengers were on the ship at the time — the company says it can hold 848 guests, and The Associated Press says different outlets have reported conflicting numbers of 300 and 700.

The diversion — and underlying legal troubles — apparently came as a surprise to those on board, according to social media posts and passenger interviews.

“Sadly, Crystal Cruises is another casualty of the pandemic. It just declared bankrupcy [sic] and is docked in the Bahamas instead of Miami to avoid confiscation due to unpaid debts,” Steven Heard Fales wrote on Facebook. “We all feel we were abducted by luxurious pirates!”

Musician Elio Pace, who boarded the ship on Tuesday and planned to stay until Feb. 23, wrote on Facebook that on the night of his first show, the captain notified those on board that Genting Hong Kong had gone into liquidation and the ship would cease to sail when it reached Miami. He said passengers were told they would need to disembark the ship and find their way home.

“Would you believe me if I told you that yesterday, Friday, (the night of my second show) after all arrangements had been set for flights, car hire etc by all disembarking passengers and crew, we were notified by the captain that the ship was no longer sailing to Miami and was instead diverting to Bimini in the Bahamas where we would arrive tomorrow, Sunday, and disembark from there?” he continued, adding that he felt most for the staff and crew who consider the ship their livelihood.

Pace told the AP that some 30 to 50 crew members disembarked because their contracts ended, while another 400 don’t know when they’ll get off or whether they’ll keep their jobs.

Some passengers were transported by ferry to Port Everglades in Fort Lauderdale, Fla., on Sunday, according to the AP. It cited a statement from Crystal Cruises saying the ride was “uncomfortable due to inclement weather” and that guests were taken to local airports.