A new day on the horizon for the Basseterre High School; rehabilitative project underway 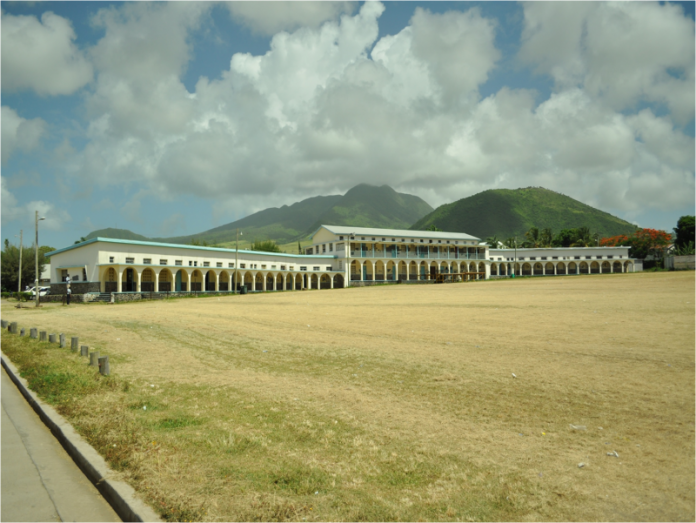 St. Kitts and Nevis (WINN): The Deputy Prime Minister and Minister of Education in the Government of St.Kitts and Nevis Hon. Dr. Geoffrey Hanley confirmed the construction of a new Basseterre High School on its original site.

On Tuesday, December 13, 2022 the Minister of Education visited the grounds of the Basseterre High School where the first phase of work has commenced; including the removal of the roof, to be followed by the next phase which is the demolition of the old structures at the school’s compound.

“What is real heartwarming for me when I looked around this morning is the many small contractors that are on site; everyone getting an opportunity to get a piece of the pie and that’s exactly what I intend to do with this project and other projects going forward. I will deliver the real deal in education” said Dr.Hanley.

The Minister of Education informed that the Government did its research and engaged stakeholders, explaining that “the project is being undertaken without haste, but with sound advice and transparency.”

Dr. Hanley said once the school is completed, the whole society will benefit, “especially the nation’s children.”

The Basseterre High School had been showered in controversy for about 8 years. The original school was abandoned at its Victoria Road location due to ongoing health issues reported by students and teachers.

The National Institute for Occupational Safety & Health received a request from the Pan American Health Organisation to evaluate the Indoor Environmental Quality at the Basseterre High School. The process was carried out in 2014 whilst the school was unoccupied.

A report from the National Institute for Occupational Safety & Health said ” We evaluated indoor environmental quality concerns at the Basseterre High School. We saw no widespread mold, but we did observe water damage likely from leaking roofs and pipes in some buildings. We found low levels of hydrogen sulfide in Science labs that seemed to be from dry drain traps. Relative Humidity levels in the naturally ventilated school classrooms were above recommended guidelines. We recommended that a comprehensive ventilation assessment be conducted and all roof and pipe leaks be fixed.”

Additionally, more controversy ensued when the former Team Unity Government made a decision to build the school on the Basseterre Valley Aquifer. Critics claimed that the Aquifer will be contaminated by the building of the new school; but according to the former Government, reports from water engineers and other technical experts who conducted feasibility studies said the Aquifer stands no risk of being contaminated.

Despite the assurance of experts, critics still did not agree to the building of the new Basseterre High School on the Aquifer. However, the Team Unity Government, prior to the August 05 elections did not listen to naysayers and went ahead clearing the land, hosted a groundbreaking ceremony and erected a billboard with a 3D model of the intended Basseterre High School at the site.

After the August 05 Elections, the new St. Kitts Nevis Federal Government informed that the school will not be built at the Aquifer, but instead at its original site.

The original Basseterre High School was abandoned in 2014 with no further occupancy. At the time of its closure, it consisted of two campuses, 12 separate classroom buildings and was utilised by over 800 students and approximately 80 staff members.  The school was transferred to temporary locations such as Warner Park Cricket Stadium, Old Girls School, the Old Boys School and in later years operated under a shift system at the Washington Archibald High School.