A Tale of COVID-19 Vaccines 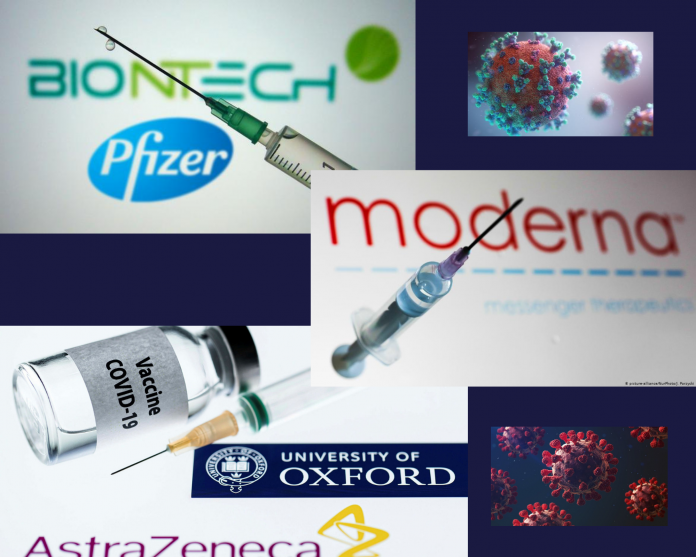 St. Kitts-Nevis (WINN) – As the federation of St. Kitts-Nevis wait in line for its turn to gain access to the vaccine, expected in the second quarter of 2021, we take a look at the most prevalent vaccines making a name for themselves in the media; Pfizer-BioNTech, Moderna and Oxford-AstraZeneca.

We take a brief look at how we got to multiple vaccines, new variants of the corona virus in 30 countries globally and countries suffering from additional waves of new cases.

According to an FDA presentation all drugs have safety risk and the only reason a person would accept such safety risk would be to:

– or decrease the chances of developing a condition or disease complication that is itself apparent to the patient and is undesirable (e.g. stroke)

Vaccines do not completely negate one’s chances of being infected with a virus, which is why the conversation around efficacy of the COVID-19 vaccines became such a selling point for the approval and distribution of the vaccines.

However, the length of time and the amount of resources put into the development of a vaccine determine its completion and distribution.

“Developing a new vaccine from scratch takes considerable time. It depends a lot on how much information is available about the disease itself, how the disease infects people and spreads, and so on. But it traditionally has taken 5-10 years to get a new vaccine.”

Considering the development of the current vaccines, mentioned in the western market, took less than a year from development, approval, manufacturing to distribution is a testament to new technology, time, money and effort poured into them.

In a timeline provided by the New York Times the collaboration between New York-based Pfizer and the German company BioNTech made history on November 9 by presenting preliminary data indicating that their coronavirus vaccine was over 90 percent effective.

A month later, on December 11, the Food and Drug Administration (FDA) granted it the first emergency use authorization ever given by the United States to a coronavirus vaccine.

Following in Pfizer/BioNTech’s footsteps, on Dec. 18, the FDA gave emergency use authorization for a vaccine made by the Boston-based company Moderna. The Moderna vaccine is the second one authorized by the FDA, a week after Pfizer and BioNTech’s approval.

In the wake of the new variant, “Virus Under Investigation (VUI) 202012/01”, reportedly increasing transmissibility between 50% and 70% in the United Kingdom (UK), officials are racing to get the situation under control.

The UK in its response to the pandemic began work on its vaccine through Oxford University and British-Swedish company AstraZeneca.

On Dec. 8, Oxford University and AstraZeneca researchers published the first scientific paper on a Phase 3 clinical trial of a coronavirus vaccine. The trial demonstrated that the vaccine can protect people from Covid-19, but it left many questions unresolved about the results.

The Oxford – AstraZeneca is approved for emergency use in three countries currently, Britain, India, and Argentina.

CURRENT EFFICACY: Up to 90%

STORAGE: Stable in refrigerator for at least 6 months

However, as a result of the reportedly more infectious VUI 202012/01, the UK has gone into another lockdown,  a month after the four-week lockdown imposed in November 2020 that ended in December 2020.

The current lockdown is expected to be for a longer period, easing, incrementally, until March, according to Senior Minister Michael Gove. The new strain has now reached 30 countries globally.

On Monday (January 4), health officials in the UK added the Oxford – AstraZeneca vaccine to its arsenal. Previously the country was using the vaccine made by Pfizer and BioNTech.

The Oxford – AstraZeneca vaccine was reportedly cheaper and easier to use as it does not require super-cold storage and made transportation cheaper and less complicated.

As mentioned, the vaccines currently on the market require two doses to achieve the 90% efficacy they purport, 40% higher than the standard threshold of approved vaccines according to the FDA’s 50% threshold announced back in June 2020.

With the current situation as it is, the two-dose method may be inefficient considering the span of time before the second dose ranging from two to four weeks.

But he supports the efficacy of the “1-dose for now” option. That option offers 50 – 60% efficacy which exceeds the established 50% threshold for moving forward.”

If there is the adoption of the one-dose method, there is a possibility that the vaccines would reach more people in a shorter period of time, however, that is still heavily dependent on manufacturing, cost, ease of transport, and distribution.