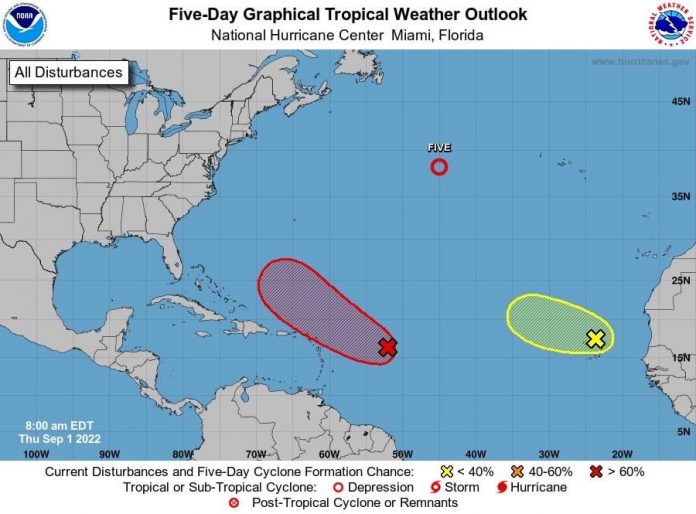 St. Kitts and Nevis (WINN): According to a statement from St. Kitts Meteorological Services, a tropical cyclone alert is in effect for the Leeward Islands and the British Virgin Islands.

The alert indicates that a tropical disturbance is in the region’s monitored area of concern, but a watch or warning is not required as the disturbance poses a low threat to the Leewards and BVI.

The disturbance is moving slowly toward the west-northwest at 5 to 10 mph, and this motion is forecast to continue for the next couple of days and is forecast to pass northeast of the Leewards on Friday and Saturday.

Some uncertainty remains about how far it will pass from the islands because the disturbance does not have a well-defined centre.

Swells from this system could produce hazardous marine conditions for beach-goers during the weekend, and residents are advised to continue monitoring the progress of this system until it passes.

The 2022 Atlantic Hurricane season was quiet for the first half of the season, with only three named systems.

International reports suggest that Tropical Depression 5, which is currently in the North Atlantic sea and not likely to make any landfall, will soon become Tropical Storm Danielle, the fourth named system and is projected to become the first hurricane of the season.

Meteorologists have suggested that regardless of its development, the system is projected to spin in the North Atlantic sea area for days to come.