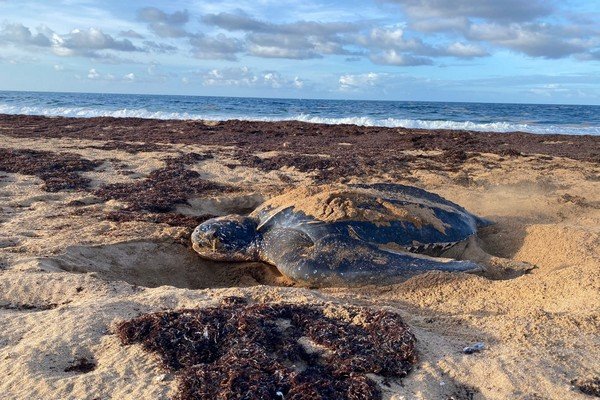 The St. Kitts Sea Turtle Monitoring Network (SKSTMN) had the pleasure of working up a
nesting leatherback female that visited one of our beaches during the day to nest this
season. This is a very rare event as sea turtles typically nest at night so we were very excited to capture some images in the daylight hours.

What a unique story this leatherback had to tell us! She was originally tagged on North
Friars Beach, St. Kitts, April 16th, 2015 by members of the SKSTMN, Georgia Sea Turtle
Center (GSTC) International Team, and Ross University School of Veterinary Medicine
(RUSVM). The turtle returned to nest on Keys Beach two more times in May 2015, and was
not observed again until captured 24 July 2018 off Nova Scotia, Canada by a sea turtle
research team led by Dr. Mike James of the Canadian Department of Fisheries and Oceans.
Following capture, the turtle was examined, measured, and equipped with a satellite-linked
transmitter, which provided valuable data on her movements. After feeding in northern
waters for several months, she migrated south. The SKSTMN had hoped that she would
return to St. Kitts to nest the following spring as leatherbacks generally nest every two to
three years, but instead she turned north again. After 8 ½ months her transmitter stopped.

So, the sighting in St. Kitts this month (June 2021) was the first time she had been seen since her capture at sea in Canada in 2018. Members of the SKSTMN team that had originally tagged her in 2015 were present to witness this nesting event and were very excited to see her six years later.

It is not unusual for female leatherback turtles in the Atlantic to migrate 4,000 miles or
more between their nesting and foraging grounds. The species’ highly migratory nature
makes it a shared resource both regionally and internationally and highlights the
importance of sharing critical biological information gathered on both the nesting beaches
and foraging grounds. Canadian waters support one of the largest seasonal foraging
populations of leatherbacks in the North Atlantic. Beginning in 1999, Dr. James initiated
annual vessel-based leatherback monitoring and tagging activities off Nova Scotia. This
research is conducted in collaboration with local fishermen and the Canadian Sea Turtle
Network (www.seaturtle.ca).

Less than 1 in 1,000 leatherback sea turtle hatchlings will survive to adulthood, and the
females that survive will not return to nest on our shores until they are around 15 years of
age. Northwest Atlantic leatherback populations have been experiencing a downward
trend in nesting numbers over the past decade with St. Kitts specifically hosting nearly 400
nests in the SKSTMN’s first year of monitoring in 2003 and only 9 last year in 2020.
Disturbing one of these ancient creatures during nesting carries a fine of EC$5,000. Since
the SKSTMN initiated their leatherback tagging efforts in 2005, 260 individual female
leatherbacks have been tagged. We urge all citizens to assist in efforts to conserve and
protect sea turtles and their habitat. It is critical that the animals we do have in our nesting
population survive and continue to produce offspring for our future generations to be able
observe.

Thanks so much to the individuals who reported this nesting activity so that we could gather critical data on this nesting population. Please report any sea turtle sightings, nesting events, etc. in St. Kitts to the Sea Turtle Hotline at (869) 764-6664 and/or the St. Kitts Department of Marine Resources at (869) 465-8045 or dmrskn@gmail.com. For more
information on sea turtles in St. Kitts please visit the SKSTMN website at stkittsturtles.org.