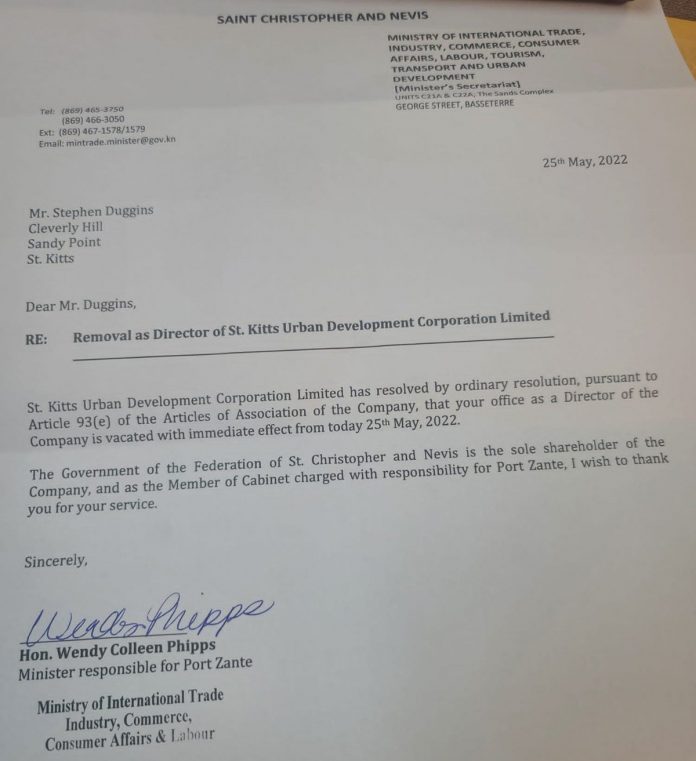 St. Kitts and Nevis (WINN) – An image of a letter making the rounds on social media suggested that Mr Stephen Duggins has been removed as the Director of the St. Kitts Urban Development Corporation Limited.

The letter reads, “ St. Kitts Urban Development Cooperation Limited has resolved by ordinary resolution pursuant to Article 93 (e) of the Articles of Association of the Company, that your office as a Director of the Company is vacated with immediate effect from today, 25th May 2022.

The Government of the Federation of Saint Christopher and Nevis is the sole shareholder of the Company, and as the Member of Cabinet charged with responsibility for Port Zante, I wish to thank you for your service.”

The leaked letter is the latest in what seems to be a string of dismissals especially following the confirmed dismissal of Former Assistant Commissioner of Police, Mr Joseph Liburd Sr as a member of the Electoral Commission for St. Kitts and Nevis.

A notable facebook blogger purported that at least two individuals from the St. Christopher Air and Sea Port Authority Board have been fired; however, these claims are unsubstantiated