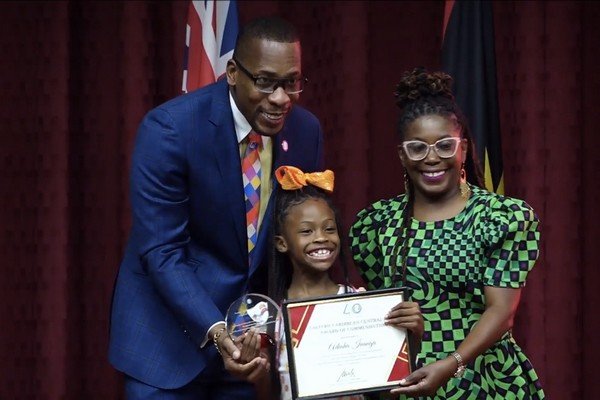 The ECCB 40th Anniversary launch was held on Thursday evening, January 19, 2022 and the proud Adiaha Inanga from St.Kitts and Nevis accepted her award of commendation and certificate of participation with great excitement.

Adiaha, a student of (S.K.I ) St. Kitts International Academy in her submission, featured the ECCB digital currency platform and showed how D Cash and the traditional forms of currency are “One Happy Family” when they work together.

Tracy Polius presented the award and certificate to Adiaha on behalf of the Central Bank.

The young artist shared some words of encouragement for other children who are interested in visual arts.

The name of Adiaha’s business or brand is ” Stophy” which features visual art content. She, therefore, used the opportunity to market her brand.

“Stophy is about imagination transformation. So, if you draw something, you can transform it into anything you want. My dad has a Stophy jacket and I would die for it because it looks so cool.”

A Stophy jacket features several drawings from Adiaha, which is often worn by her dad Enoete Inanga. She said her dad assisted her with the ECCB Stamp Design and also expressed that he encourages her to excel in academics as well.

A statement posted on Stophy’s Facebook page said while Adiaha’s design won’t be featured on the stamps, “she definitely made an indelible mark on the hearts and minds of folks from such a globally formidable institution, and for us, that’s a sure winner, every time.”