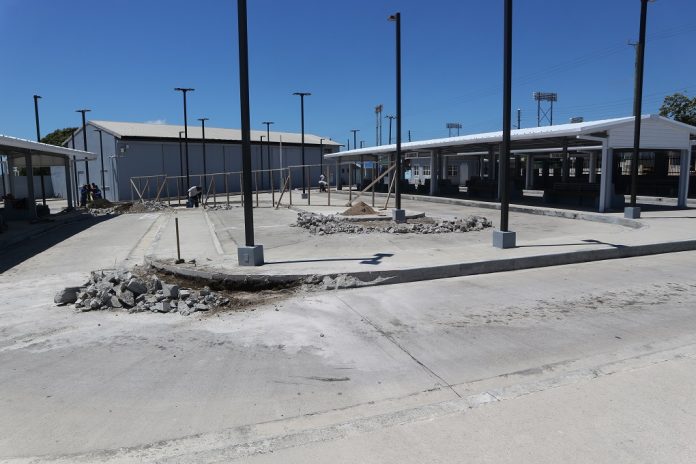 Basseterre, St. Kitts (SKNIS): Bus drivers providing service to the Eastern side of St. Kitts were temporarily relocated to Branch Street as work to adjust driving lanes at the East Line Bus Terminal is underway.

The concern about flexibility was raised by members of the East Bus Association during various meetings with the Cabinet and other government officials over the past few days. The members also requested adjustments to make it easier for buses to exit the queuing line.

George Gilbert, Engineer at the Public Works Department, explained that some of the newer buses used for public transportation are wider and longer than some of the older buses. As such, the drivers are having difficulty with some of the tighter turns.

Deputy Prime Minister the Honourable Shawn Richards said that the government previously moved to address these issues at the terminal several months ago.

“In December last year, the Public Works Department … entered into a contract agreement with a contractor – the very same contractor who had done the work there – to make the necessary designs in terms of the space, to correct it so that they (bus drivers) are able to maneuver better,” Honourable Richards stated.

He added that the start of the reconstruction work suffered some delays, however, it has since begun “in earnest” on Monday, March 22, 2021. It is scheduled to be completed within one month.

The bus drivers also highlighted other challenges related to greater representation on the Transportation Board as well as a greater emphasis on the application of the rules regarding the pickup and drop off of passengers.

“Those concerns are being addressed by the government,” Deputy Prime Minister Richards stated, as he briefed members of the media during the Prime Minister’s Monthly Press Conference on Tuesday (March 23, 2021).