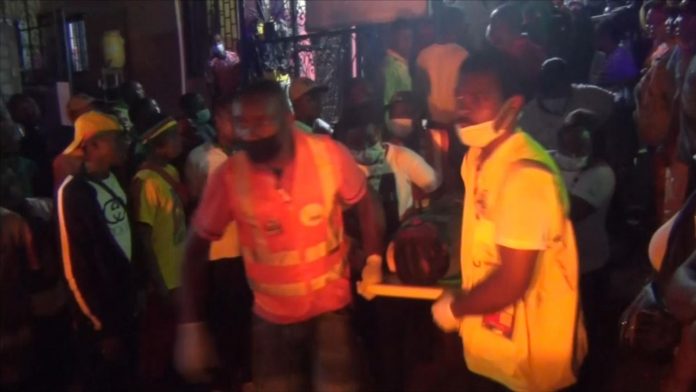 (Al Jazeera) Yaounde, Cameroon – Anxiety, agitation and the delay in letting fans inside the stadium led to the stampede that killed at least eight people at the Olembe Stadium in the capital Yaounde where the hosts beat Comoros 2-1 to qualify for the quarterfinals of the Africa Cup of Nations (AFCON).

The stadium’s capacity of about 60,000 has been limited to 60 percent because of COVID-related regulations, with the cap increased to 80 percent for matches involving the national team.

On Monday, eight people died while 38 suffered injuries in the incident, according to a statement released by Cameroon’s ministry of communication.

“Jostling occurred at the southern entrance of the football stadium,” the statement added.

“While welcoming the enthusiasm shown by the Cameroonian populations since the start [of the tournament], the Government calls once again for the sense of responsibility, discipline and civic-mindedness for the total success of this great sporting celebration, at the same time as giving the assurance that all the necessary arrangements will continue to be made for this purpose.”

Therese was one of the many fans caught in the stampede outside the stadium.

“We had already gone through the health check and were waiting at the fourth gate,” she told Al Jazeera on Tuesday.

“The fourth gate was locked and people were agitated because we had been standing there for a while and it was getting close to kickoff.

“So when the security guys started opening the gate, people pushed them away and opened it wide. It was in that commotion that everything happened, because everybody wanted to enter at the same time, fearing they [security officials] might lock the gates again.

“At some point, I could not feel my right leg because I was on the floor. People were pulling my hair, my neck,” added Therese, who got pulled out of the crowd by her friends.

“When I woke up, a saw people on the ground, some motionless, but I could not confirm if they were dead.”

A video has emerged of the fans scaling the fence around the stadium on Monday.

In a push to boost stadium attendance, the government announced on January 15 that schools and work in the public sector would close at 2pm on match days.

There were also reports of government officials handing out free tickets and transport for fans who wanted to attend the matches at the stadiums.

The communication ministry added that President Paul Biya “has also ordered the opening of an investigation”.

The Confederation of African Football, CAF, said it is “investigating the situation and trying to get more details on what transpired”.