Aftershock in Afghanistan as quake toll rises to 1,150 dead 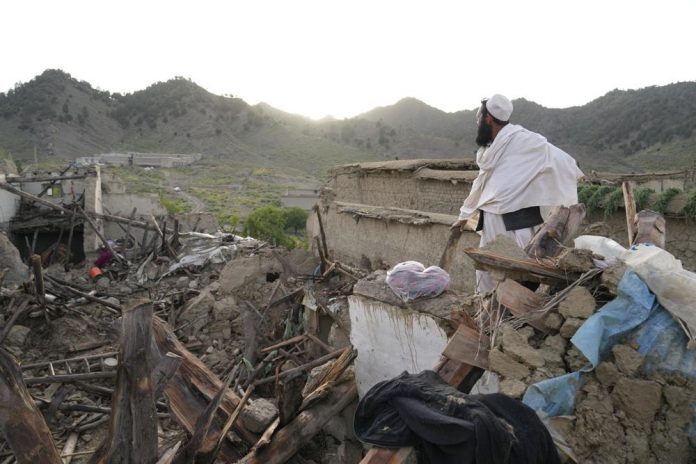 GAYAN, Afghanistan (AP) — An aftershock took more lives Friday and threatened to pile even more misery on an area of eastern Afghanistan reeling from a powerful earthquake that state media said killed 1,150 people this week.

Among the dead from Wednesday’s magnitude 6 quake are 121 children, but that figure is expected to climb, said Mohamed Ayoya, UNICEF’s representative in Afghanistan. He said close to 70 children were injured.

That earthquake struck a remote, mountainous region already grappling with staggering poverty at a time when the country as a whole is spiraling deeper into economic crisis after many countries pulled back critical financing and development aid in the wake of the Taliban’s takeover. On Friday, Pakistan’s Meteorological Department reported a new, 4.2 magnitude quake that state-run Bakhtar News Agency reported took five more lives in hard-hit Gayan District and injured 11 people.

International aid had been keeping the country afloat, and its withdrawal left millions unable to afford food and further strained already struggling medical facilities. Nearly half the population of 38 million cannot meet their basic food needs, while some civil servants, like doctors, nurses and teachers, weren’t paid for months because the Taliban government is unable to access frozen foreign reserves. Salary delays continue throughout the public sector.

Afghanistan’s international isolation is also complicating relief efforts since fewer aid organizations have a presence in the country, and international sanctions on Afghan banks make it difficult to send cash into the country. Despite waivers from the U.S. Treasury Department that allow money to be sent to aid groups, banks are hesitant to handle such transactions for fear of running afoul of rules anyway.

Aid groups lament that means they have to pay local staff with bags of cash, physically carried into the the country by their staff and then distributed throughout the provinces in person. The process is expensive, incurring fees along the way for transport and security.

Aid organizations like the local Red Crescent and U.N. agencies like the World Food Program have sent food, tents, sleeping mats and other essentials to families in Paktika province, the epicenter of the earthquake, and neighboring Khost province. Several countries have sent cargo planes of aid.

Still, residents appeared to be largely on their own to deal with the aftermath as their new Taliban-led government and the international aid community struggle to bring in help. The shoddy mountain roads leading to the affected areas were made worse by damage and rain.

Thousands of stone and mud-brick homes crumbled in the quake, which struck at night, often trapping whole families in the rubble. Many of those who survived spent the first night outside in a cold rain. Since then, villagers have been burying their dead and digging through the rubble by hand in search of survivors.

The Taliban director of the Bakhtar News Agency said Friday the death toll from the first quake had risen to 1,150 people. Abdul Wahid Rayan said at least 1,600 people were injured.

The United Nations Office for the Coordination of Humanitarian Affairs has put the death toll at 770 people.

It’s not clear how death toll counts are being reached, given the difficulties of accessing and communicating with the impacted villages. Either grim toll would make the quake Afghanistan’s deadliest in two decades.

State media reported that close to 3,000 homes have been destroyed or badly damaged, including at least 1,000 in Gayan. While modern buildings withstand magnitude 6 earthquakes elsewhere, Afghanistan’s mud-brick homes and landslide-prone mountains make such quakes more dangerous.

In villages across Gayan district, toured by Associated Press journalists for hours Thursday, families who had spent the previous rainy night out in the open lifted pieces of timber of collapsed roofs and pulled away stones by hand, looking for missing loved ones. Taliban fighters circulated in vehicles in the area, but only a few were seen helping dig through the rubble.

There was little sign of heavy equipment — only one bulldozer was spotted being transported. Ambulances circulated, but little other help to the living was evident. One 6-year-old boy in Gayan wept as he said his parents, two sisters and a brother were all dead. He had fled the ruins of his own home and took refuge with the neighbors.

Afghanistan’s economy had been reliant on international donor support and aid even before the Taliban seized power last August as the U.S. and its NATO allies withdrew their forces, ending a 20-year war that drove the same insurgents from power in the wake of the 9/11 attacks.

Aid groups still operating in Afghanistan are now scrambling to get medical supplies, food and tents to the remote quake-struck area, but U.N. agencies are facing a $3 billion funding shortfall this year.

Trucks of food and other necessities arrived from Pakistan, and planes full of humanitarian aid landed from Iran, Qatar and the United Arab Emirates. India sent a technical team to the capital, Kabul, to coordinate the delivery of humanitarian assistance. India said its aid would be handed over to a U.N. agency on the ground and the Afghan Red Crescent Society.

Other countries that have offered aid were at pains to underscore that they would work only through U.N. agencies, not with the Taliban, which no government has officially recognized as of yet. Some have called on the Taliban to first address human rights concerns, chief among them the rights and freedoms of Afghan women and girls.