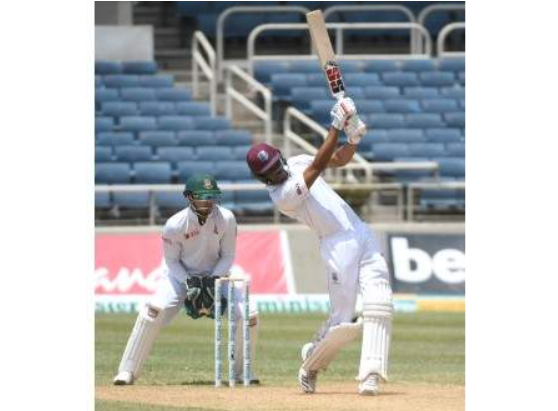 Resuming the final morning at the Daren Sammy National Stadium on 218 for four in pursuit of 311 or victory, Hamilton’s XI defied a two-wicket burst from medium pacer Kyle Mayers (2-36) to get over the line.

Chase, who retired hurt the previous evening on one following a blow to the groin, returned to stroke an unbeaten 45 while all-rounder Raymon Reifer carved out 32 and Paul Palmer, 23.

Off-spinner Rahkeem Cornwall added another wicket to his tally to end with three for 99.

Requiring a further 93 runs at the start, Hamilton’s XI flourished as left-handers Reifer and Palmer extended their fifth-wicket stand to exactly 50 before being separated.

Palmer, starting the day on 15, fell to a catch at the wicket off Mayers at 237 and with two runs added, Cornwall gained an lbw decision against Reifer who counted four fours in an 84-ball knock.

When Mayers got Hamilton to edge to Shai Hope at third slip, victory appeared unlikely for Hamilton’s XI but Chase combined in an unbroken 61-run, eighth-wicket partnership with Keron Cottoy (19 not out) to turn the tide.

Chase, pushing for a place in the side for the opening Test against South Africa starting here next week, crunched half-dozen fours and two sixes off just 50 deliveries while Cottoy hit two fours off 34 balls.

The fixture was the only match preparation for the two-Test series against the Proteas and selectors will now sit down to choose a squad for the encounter.