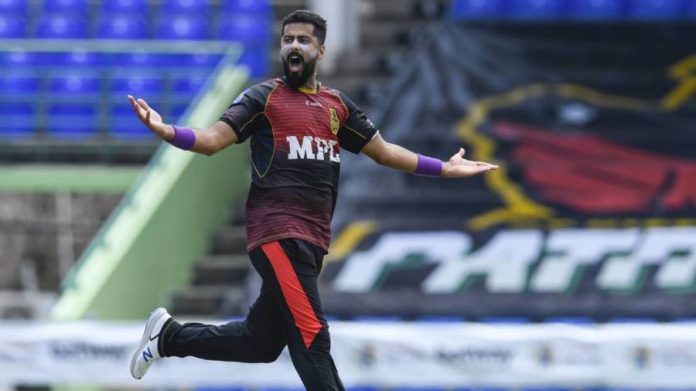 (ESPNcricinfo) – A masterclass of a bowling performance saw Trinbago Knight Riders rout Jamaica Tallawahs for 92, inflicting a 75-run defeat in the process. American fast bowler Ali Khan ran the show, removing the first three while conceding just two runs in his first two overs and finishing with figures of 4 for 6, before the spinners suffocated Tallawahs and effectively put an end to the chase before it could truly begin.

Knight Riders had put on an above-par 167 for 4 despite struggling with the bat for much of their own innings, before Tim Seifert and Kieron Pollard added 49 in the final two overs to give them momentum they would never relinquish.

Batting first, Knight Riders started cautiously, content to go along at a run a ball in the power play without losing a wicket. However, as the innings wore on, it became clear runs off the spinners were hard to come by, with Imad Wasim and Veerasammy Paul allowing just 33 in their combined eight overs. They also removed Colin Munro and Leonardo Julien, while Carlos Brathwaite took care of an off-colour Lendl Simmons at the top.

The innings looked like it was stalling before Seifert came out to partner Pollard. Smashing 24 off just eight balls, Seifert helped Pollard change gear too, setting up a chase that suddenly looked extremely stiff.

Tallawahs never really got going, mainly due to an explosive two over spell from Ali Khan at the top. He might have been bowling in a Test match, so conventional was his line, but it kept on producing the same result. Kennar Lewis, Haider Ali and Shamarh Brooks all nicked off to length balls shaping away, and as the asking rate began to rise, the batters crumbled under stifling discipline from the spinners. Sunil Narine, held back until the tenth over, took two wickets for 11 in his four, including that of Andre Russell towards the death, which effectively killed the game off.

Akeal Hosein and Khary Pierre played their part at the top, complimenting Ali Khan by keeping things tight at the other end, while Tallawahs’ belief of chasing the total down diminished rapidly. In the end, both innings illustrated the importance of tight spin bowling, but Knight Riders’ ability to keep their powder dry by having wickets at the end to play with, and an explosive final two overs with the bat, had made all the difference.