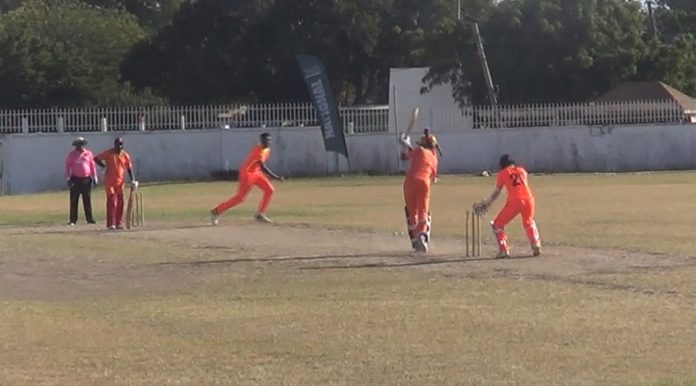 St. Kitts-Nevis (Sports Page) – The feature match on Sunday 14th March, in the ongoing T-10 tournament being hosted by the Nevis Cricket Association and sponsored by the St. Kitts-Nevis-Anguilla National Bank, was a RING-DINGER.

A sizeable crowd was at the ET Willet Park, to observe the encounter, as Pennyless All-stars faced off with Highlights Int.

Highlights Int. won the toss and asked the All-stars men to bat first.

This paid immediate dividends, as they soon had the prize wicket of Ross Powell, for a golden duck.

However, Saeed Williams led the fight with an attacking innings, later, ably assisted by his Dad, senior statesman, Stuart Williams, who showed that he still has the class of the great player he is.

First ball up, was cut superbly, backward of point, for a glorious four.

However, there was another twist in the tale, as Mikyle Louis, with his wrist spinners, conjured up a hat trick: Tonito Willet, followed by one ball ducks for Akito Willet and Kian Pemberton.

Pennyless All-stars still managed a competitive 98, when they were bowled out, at the end of their allotted 10 overs. They were helped in a huge way, with all of 25 extras.

Highlights in response, were set back on the back foot right early, as except for the flowing bat of Mikyle Louis, batsmen 2, 3 and 4, all got ducks.

However, Darc Browne, Adrian Williams and Patrice Nisbett, all tried to get to the target, but Highlights fell 11 runs short in the end.

All Stars won by 11 runs

Man of the match-Mikyle Louis