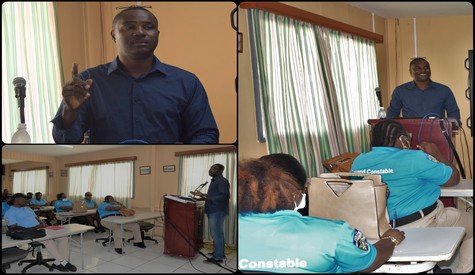 Basseterre, St. Kitts (RSCNPF): Assistant Commissioner of Police (ACP), Adolph Adams, implored Island Constables to work with ethics in mind. The ACP was, at the time, speaking during a session at the recently concluded Island Constables Refresher Course.

He shared with them a few values they should be governed by both on the job and in their personal lives.

“We are charged with the responsibility of looking out for human beings and so we should treat people with respect [and] dignity. We have to learn to be honest. We have to be law-abiding. We have to be fair. We have to show good leadership and do unto others as you would have them do unto you,” ACP Adams told the Island Constables.

He explained to them that honesty was an integral characteristic they should have in order to be a professional Island Constable.

ACP Adams admitted that law enforcement could be a difficult field to work in. Because of this, he added that having a strong support system was essential.

“I found a friend who was much older than me who was a father figure, who experienced all that I was experiencing and who could have directed me along a straight and narrow path…coping skills may be difficult, but there are people who have been there and [have] done that and we need to find those people…find positive people…”

Assistant Commissioner of Police Adams also stressed the importance of working with a strong moral compass and giving persons a fair chance.