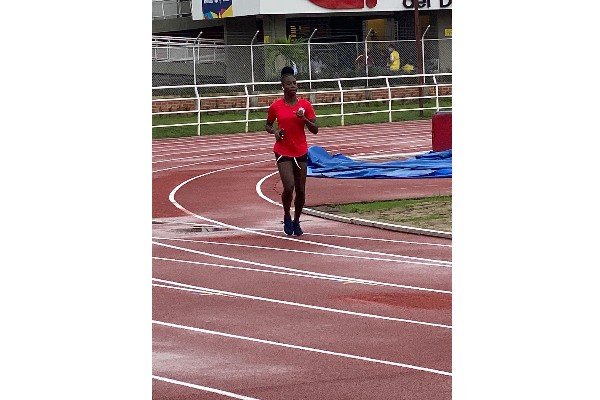 (Press Release) Today, Wednesday, December 1, 2021, the Inaugural Panamerican Junior Games is in its 6th day since the November 25 Opening Ceremony in Cali, Columbia.

Of interest to SKN sports fans will be the appearance in the 100 metre Panamerican Junior Games Female Final of Amya Clarke who will be running out of Lane 3 at 4:35 pm ( Cali Time)/5:35 pm (SKN Time).

Amya qualified for today’s final showdown by winning her semi-final Heat yesterday in a ‘confident and comfortable’ 11:56 seconds.

Amya certainly cannot lay her guard down with any of the young aspirants who comprise the Final List but certainly would have her eyes on two other finalists who bettered her qualifying time, in the persons of (i) Ecuador’s Gabriela Suarez-11:32 seconds in Lane 4 and (ii) Brazil’s Gabriela Mourao–11:52 seconds in Lane 6.

The buzz around the stadium is that Amya has what it takes to mount the podium. The question is which rung of the podium it will be. If Amya were to provide you a response, I have no doubt that it would be,” it’s all in the mind.”

Yet another point of interest for SKN is the first appearance on the track for competitive action by the sole male athlete of the trio of athletes who have been participating in the Panamerican Junior Games as part of TEAM SKN. He is Taj’h Liburd who evokes memories of those exciting Interschool Track and Field Championship days when he was the one to beat in the 800 metres. Nevisians, in particular, are expected to be especially glued to their various devices to follow this 22 year old and will him on from this afternoon’s semifinal to final action.

Taj’h has, on account of varying circumstances, opted to focus on the 400 metres instead of the double lap event. Since then, he has even had the distinction of bearing the coveted title of National champion in the 400metre event.

Taj’h is looking forward to, “execute, execute, execute,” plans rehearsed in training and, simply, ” have fun”. However, Taj’h is quietly and steadfastly committed to the “initial goal of qualifying for the final”.