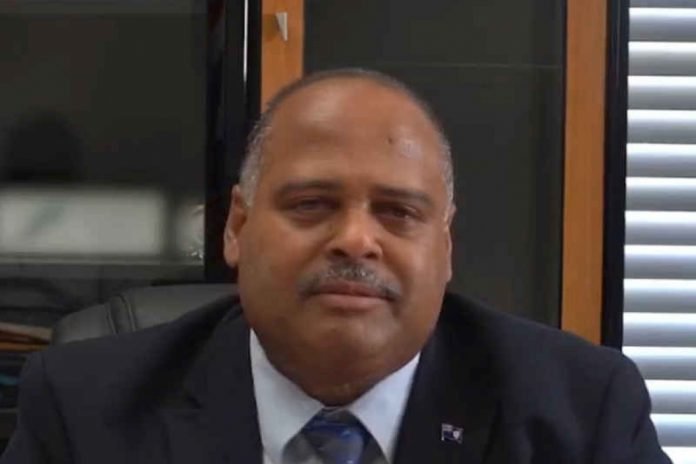 (Daily Herald) ANGUILLA–Premier Ellis Lorenzo Ellis began the government’s weekly press conference on Monday, July 4, with a recap of recent events within his ministry, to include the approval of amendments to the Goods and Services Tax (GST) during the House of Assembly on Thursday, June 30, and the re-joining of Minister Dee-Ann Kentish-Rogers to the government on July 4, following her short-lived resignation on June 30.

Webster said, “This morning, [Monday – Ed.], we welcomed back Minister Dee-Ann Kentish-Rogers, who has come in and has decided that she wants to do the work in the Ministry of Education and Social Development for the people of Anguilla. I want to thank her for that and certainly we continue to move forward as a team with one intent: to look out for the people of Anguilla and especially the youth, where we invest in them and they feel they have ownership in this country of ours.”

The premier introduced Quincia Gumbs, who earlier in the day was sworn in as Minister for Sustainability, Innovation and the Environment, as well as Merrick Richardson, who was also sworn in earlier in the day as Parliamentary Secretary responsible for Sports, Troubled Families, Probation and Renewal Energy Innovation.

Responding to a press query as to how he had been able to reach out to Kentish-Rogers, resulting in her rejoining the administration, Ellis said, “Even before her resignation, there were concerns about the GST and its implementation. Certainly we know the tax act was passed a year ago in July 2021 with Inland Revenue and Customs working to implement it with the least invasive impact as they could.” He said, “Where we have had philosophical differences, we’ve worked those out and we do know that the intent is good. She has voiced that, and we as a party will continue to work with the people, for the people.” The premier added that he has also reached out to the resigned Minister Kyle Hodge, who did good work while in office.