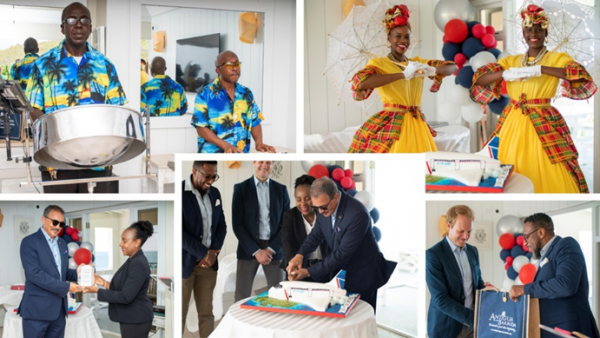 The Honourable Charles Fernandez, Minister of Tourism and Investment speaking at the event, congratulated the airline on the excellent relationship created throughout the sixty-year period. He expressed interest in continued partnership and the further growth of flights to the destination.

“British Airways has for sixty years connected travellers from the UK and Europe to Antigua and Barbuda, allowing us to share our culture, our heritage, our hospitality, and the beauty of our destination. As a trusted partner, British Airways is interwoven into our tourism story. We share a rich history – from destination partnerships, marketing campaigns, to unwavering support during times of need, they have without a doubt contributed to the success of our tourism product. As we share in this momentous occasion, we congratulate and applaud BA. We look forward to many more years of partnership, and a mutually rewarding relationship with our twin-island paradise.”

British Airways, Regional Director (Antigua, St. Kitts, and Turks & Caicos) Patrice Skerritt commenting on the tourism celebrations said: “We are most appreciative of your efforts in recognizing this milestone with us at British Airways.

“British Airways has always had a very strong relationship with Antigua and Barbuda and for sixty years – three generations – we have flown visitors to enjoy holidays, and we have reunited our Caribbean friends and family both here in the region and in London and beyond.”

Skerritt thanked the gathering for joining in the anniversary celebrations and noted that the airline looked forward to serving the route for many more years to come.

A sense of nostalgia was brought to the event, as CEO of the Antigua and Barbuda Tourism Authority Colin C. James shared tales of the airline from its first voyage to Antigua in 1962, their 1965 corporate sponsorship of Antigua Carnival, the November 2 1984 arrival of the Concorde to Antigua, and the development of a modern day partnership considered a “marriage made in heaven, with an airline that has always served the destination well”.

In November 2019, the Antigua and Barbuda Tourism Authority honoured British Airways as an outstanding partner by presenting the airline with a ‘Black Pineapple Award’ for their contribution to the success of the summer marketing campaign #WhatCoolLooksLike.

Yesterday’s celebrations featured the presentation of a beautiful British Airways airline sculpted cake to British Airways’ Regional Director – Airports Patrice Skerritt and Key Partnership Manager visiting from the UK Marc James. British Airways was also presented with a replica of a historic photo obtained from the Museum of Antigua and Barbuda of 1965 Carnival Queen Hyacinth Barrow waving to onlookers as she prepared to board BOAC on a prize-win flight to England. Minister Fernandez was also gifted with a sixty-year commemorative plaque from the airline.