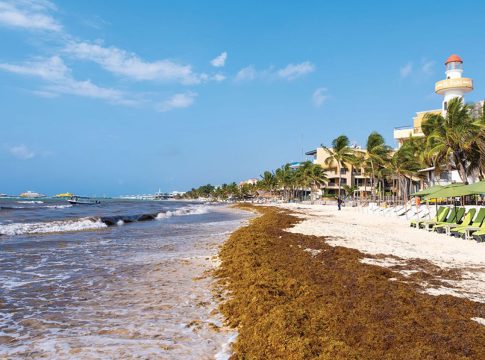 Antigua and Barbuda – (Antigua Observer) – News that over the next couple of months there will be a likely decrease in the sargassum that often blankets many of Antigua’s beaches has been received optimistically by the Antigua and Barbuda Hotels and Tourism Association (ABHTA).

The seaweed has been affecting Antigua and Barbuda and neighbouring Caribbean islands for 10 years, creating both ecological and economic challenges, and last month’s impact was one of the worst on record.

According to a recent report from the Environment Unit at the Antigua and Barbuda National Park, the University of South Florida’s Optical Oceanography Lab reported that, “in July 2021, the overall sargassum amount decreased from June 2021 across the Central Atlantic by about 18 percent”.

It noted, however, that, “despite this overall decrease, large amounts of sargassum were observed in the region east of the Lesser Antilles [and] in all regions combined, total sargassum amount was higher than all previous Julys, with the exception of July 2018”.

Marine ecologist Ruleo Camacho – who prepared the report – had predicted at the start of the year that it could be a bad one for sargassum, noting that satellite images had identified tons of the seaweed heading for the region.