Antigua To Benefit As Mexico Gives Ventilators To Caribbean Countries 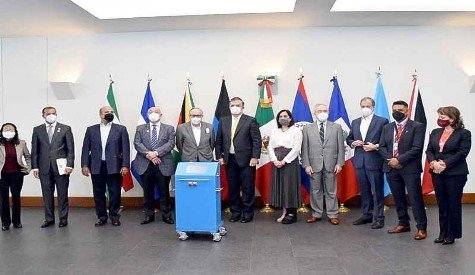 This is thanks to an operation financed with resources from the Mexican Agency for International Cooperation and Development AMEXCID and with the support of the National Institute of Nutrition.

Ebrard Casaubon recalled how, in a few months, Mexico went from being in a situation of deficit of Mexican ventilators to care for COVID-19 patients to having its own production that today allows the country to be in solidarity with nations that require it.

“Mexico sends equipment to other countries, and it sends to those countries because it is very important to us the luck they have, since that is what we have demanded from the powerful, from those who have more, from those who have more industries, more resources. We have told them: it has to be universal, it has to be equitable, we have to be in solidarity; we are one people, one community,” said Ebrard.

With the virtual presence of authorities from Caribbean countries, Governor of San Luis Potosí, Juan Manuel Carrera López and Senator Héctor Vasconcelos Cruz, the foreign secretary recalled that, before the arrival of the pandemic in Mexico, President Andrés Manuel López Obrador had instructed the ministry to import ventilators and supplies necessary to close the deficit of this and other medical supplies. This was done primarily in the US and Chinese markets.

While complying with this instruction to guarantee supply, the Ministry of Foreign Affairs participated in the effort to develop and produce a national ventilator. This took place based on developments by the team of biomedical engineers of the National Institute of Nutrition and with the support of a group of Mexican companies, including FEMSA, Bocar and Metalsa, among others.

Ebrard highlighted that manufacturing the ventilator, which was initially designed on April 3, serves as a milestone that shows what Mexicans are capable of.

“What can stop us? Well, the doubt, supposing that we cannot, doubting of ourselves, thinking that we are little. But no, this is a great people, we are a people capable of moving forward, it is what President López Obrador asked us and it is what he has said all the time: trust in ourselves. It is what we have and that is why we are here today [Wednesday – Ed.],” affirmed the foreign secretary.

Secretary Ebrard said that, for the development of the vaccine against COVID-19, the Ministry of Foreign Affairs is following the same strategy as with the ventilators: guaranteeing access to international markets and participating in initiatives to promote the development of a national antidote.

“Now we speak about the vaccine, the Russian vaccine. Yesterday [Tuesday] I was telling you about the Italian vaccine, but [we] are also supporting the four projects for Mexican vaccines and Mexican treatments and Mexican tests. What matters is not only having the vaccine quickly, but that Mexico does not have, in the next pandemic, to be looking for the vaccine anywhere … that we can do it,” he said.

For his part, Governor and President of the National Conference of Governors CONAGO, Carrera López recognised the effort of the Ministry of Foreign Affairs and the government of Mexico in facing this challenge and recovering one of the best traditions of Mexican foreign policy, which is solidarity, in this case with the fraternal countries of the Caribbean. Likewise, he expressed his appreciation that this ventilator has been technologically developed and pointed out that “it is something very significant in the midst of what the COVID-19 emergency represents.”

Also, during the meeting, the Executive Director of AMEXCID, Laura Elena Carrillo Cubillas announced that technical training would be provided to the Caribbean countries for the use and installation of these ventilators.

The purpose is that, once the corresponding technical requirements are met, they will be sent to the named Caribbean nations, taking into account that, as the manufacturing is carried out in Mexico, more can be sent according to demand.