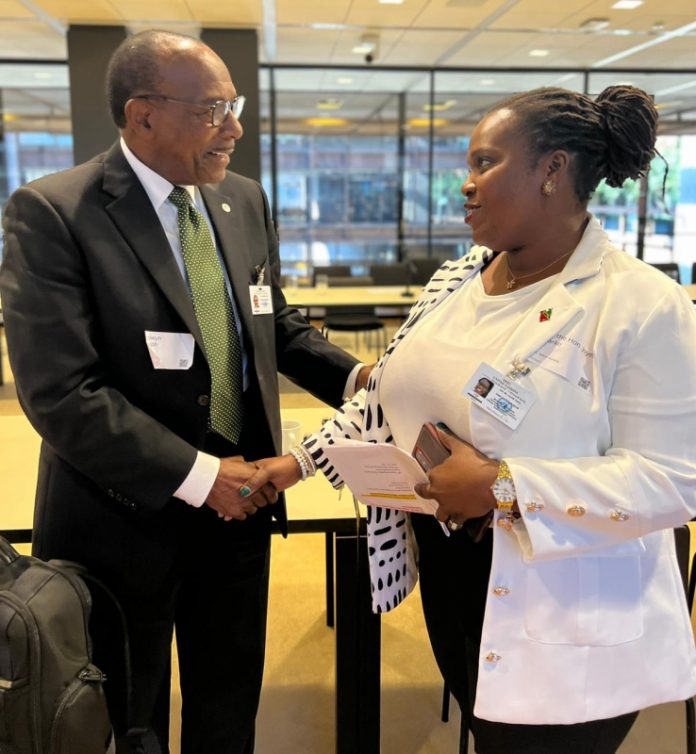 BASSETERRE, St Kitts, 24 September, 2022 – St Kitts-Nevis is moving closer towards addressing climate-related challenges, as Antigua and Barbuda has made commitments to support the federation in its accreditation bid for Green Climate Funding (GCF) and by extension, its move to address plastic pollution. 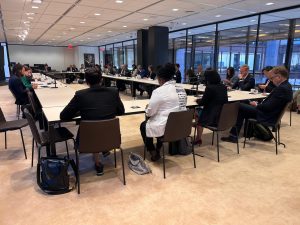 During the 77th UN General Assembly, Hon Dr Joyelle Clarke met with the co-chairperson of the Alliance of Small Island States (AOSIS), Molywn Joseph who is also Antigua and Barbuda’s Minister of Environment, Health and Wellness. During this meeting, St Kitts-Nevis’ participation in the roundtable discussion, cements its intentions to address the introduction of “single-use plastic” through legislative support and secondly, to address plastic pollution, in general.

She said, “Following the session, Minister Molwyn and I had a small debriefing and agreed on further bilateral meetings between Antigua and Barbuda and St Kitts and Nevis, so that we can move forward together to accreditation to the Green Climate Fund as well as the Adaptation Fund, and addressing plastic pollution.”

The Minister of Energy and Climate Action continues her work leading up to her participation in high-level sessions on renewable energy.

Meanwhile, Dr Clarke praised the expanded St Kitts-Nevis delegation for UNGA 77 and said it was indeed a success and sets the stage for participation at the upcoming UN Climate Change Conference, commonly known as COP27.

She said, “The Foreign Minister was able to attend a number of sessions, not only related to Foreign Affairs but also to the CARICOM’s position as it relates to COP27 as well as having Loss and Damage on the agenda. Fortunately, a number of investors have reached out indicating their willingness to support St Kitts and Nevis in its bid for renewable energy and reduction in fossil fuel consumption.”

In relation to regional interests, Dr Clarke said countries with new administrations such as Grenada and St Kitts-Nevis, have recognized the importance to lend their collective voices in the Caribbean, which says we need to solidify our agenda heading into COP27 and this may need participation in a series of high-level conversations.