Antiguan set to fly to space 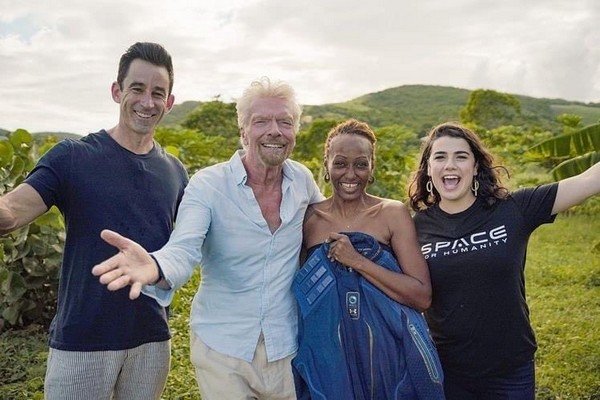 (Antigua Observer) An Antiguan woman and her daughter will be flying into the Earth’s orbit having won two tickets worth $450,000 each from space tourism company Virgin Galactic.

Virgin Galactic founder Sir Richard Branson surprised Keisha Schahaff, a health and energy coach, with the news at her home in Antigua in early November and Schahaff decided that she will share the once in a lifetime opportunity with her 17-year-old daughter, a science student living in Britain who dreams of one day working for NASA.

In a social media post, an excited Schahaff wrote that she is “ready for the biggest adventure of [her] life.

“The training will take some time I know but I’m super ready to embrace every experience onwards. It’s a pleasure to be an ambassador for our island and the Caribbean, the first of our kind to enter space and I’m ready to represent. My heart is open and ready to unite, to empower and to inspire,” she stated.

She also indicated that her intention is to “contribute positively to our society, bringing unity, protecting earth and growing as a human family”.

Schahaff went on to encourage persons to never give up hope saying “dreams do come true and this will empower us all to trust in the alignment of the universe and knowing that anything is possible”.

Schahaff won the prize after entering a fundraiser lottery organised by Virgin Galactic on the Omaze platform, which raised $1.7 million.

The money will be donated to the NGO Space for Humanity, which works for wider access to space.

The amount she donated was not made public, but entry started with a minium contribution of $10.

Schahaff will be among the first of Virgin Galactic’s space tourists, but her place in the line has yet to be determined, a company spokesperson said.

Their aim is to sell 1,000 in total before the launch of commercial flights, the first of which is to take place in late 2022.

The proposed trip offers only a few minutes in zero gravity. A giant carrier plane takes off from a traditional runway carrying the space vessel that looks like a large private jet and then releases it at altitude.

The space plane then ignites its own rocket engine until it exceeds 50 miles (80 kilometers) in altitude — the limit of space, according to the US military — before gliding back to the runway.