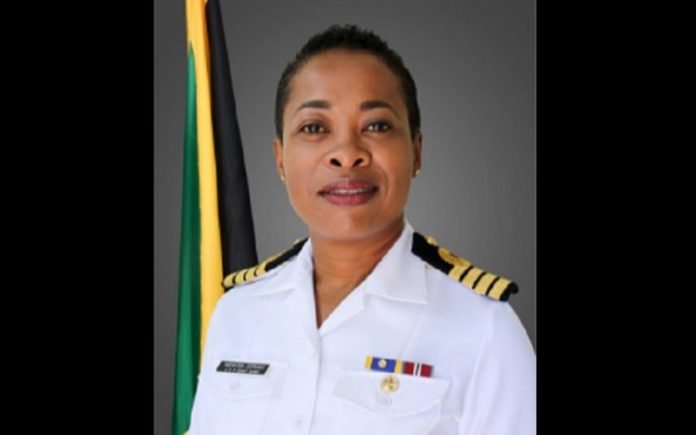 (Loop Jamaica)  Commodore Antonette Wemyss Gorman is set to create history when she becomes the first woman to be appointed Chief of Defence Staff of the Jamaica Defence Force (JDF).

The 48-year-old army woman is scheduled to succeed Lieutenant General Rocky Meade who will be retiring early next year after 38 years in the army.

Wemyss Gorman is also to be promoted to the rank of Rear Admiral in January 2022 at the time of her appointment as chief of defence staff.

A release from the Office of the Prime Minister (OPM) said: “Following a meeting of the Defence Board on Wednesday 22 September 2021, the retirement of Lieutenant General Rocky Meade, chief of defence staff, was approved.”

General Meade served the JDF for 38 years. He was appointed Chief of Defence Staff in December 2016, according to the release.

The OPM release added: “The Defence Board is announcing its decision, after interviewing three senior JDF officers, to appoint Commodore Antoinette Wemyss Gorman to the post of chief of defence staff.

“Commodore Wemyss Gorman will be promoted to the rank of rear admiral; her promotion and appointment take effect in January 2022.”

According to the OPM, Wemyss Gorman is a career officer whose 29 years of service has been “characterised by notable achievement and exceptional service” to the JDF.

The released added: “Additionally, she has performed at the strategic level of command within her technical area of expertise and in other domains, both internal and external to the JDF.”

Wemyss Gorman “holds a Master’s Degree with distinction in National Security and Strategic Studies from the University of the West Indies”, the release added.

“Promoted to her current rank in December 2019, Cdre Wemyss Gorman assumed the post of Force Executive Officer (FXO) in January 2020. She currently provides strategic guidance to the force in support of the transformational vision of the chief of defence staff,” the OPM stated.

Wemyss Gorman is also responsible for the establishment of the Caribbean Military Maritime Training Centre (CMMTC) and the Maritime Air and Cyber Command, which includes the JDF Coast Guard, the JDF Air Wing and Special Forces.

Further, she has represented the JDF and Jamaica at “various local and international fora on matters of regional security, blue economy, transnational organised crime, women peace and security”, among other defence matters.

She is married and is the mother of a 15-year-old son, disclosed OPM in its release on the historic appointment.