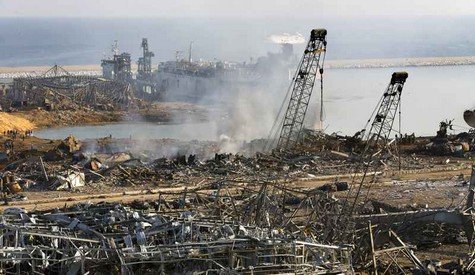 BEIRUT (AP) — Residents of Beirut confronted a scene of utter devastation Wednesday, a day after a massive explosion at the port rippled across the Lebanese capital, killing at least 100 people, wounding thousands and leaving entire city blocks blanketed with glass and rubble.

Smoke still rose from the port, where a towering building of silos was half destroyed, spilling out grain. Hangars around it were completely toppled. The blast knocked out a crater some 200 meters (yards) across that filled with seawater — it was as if the sea had taken a bite out of the port, swallowing buildings with it.

Much of downtown was littered with damaged vehicles and debris that had rained down from the shattered facades of buildings.

An official with the Lebanese Red Cross said at least 100 people were killed and more than 4,000 were wounded. George Kettaneh said the toll could rise further.

The blast appeared to have been triggered by a fire that touched off a cargo of ammonium nitrate that had been stored at the port for years, though it was unclear what sparked the fire. Hitting with the force of an earthquake, it was the most powerful explosion ever seen in the city, which was split in half by the 1975-1990 civil war and has endured conflicts with neighboring Israel and periodic bombings and terror attacks.

Scores of people were missing, with relatives pleading on social media for help locating loved ones. An Instagram page called “Locating Victims Beirut” sprang up with photos of missing, and radio presenters read names of missing or wounded people throughout the night. Many residents moved in with friends or relatives after their apartments were damaged and treated their own injuries because hospitals were overwhelmed.

Lebanon was already on the brink of collapse amid a severe economic crisis, and its capacity to deal with the disaster is crippled. With buildings severely damaged, potentially large numbers are now homeless at a time when many have lost their jobs and seen their savings evaporate because of a currency crisis. Food security is a worry, since Lebanon imports nearly all its vital goods and its main port is devastated.

The health system is confronting a coronavirus surge, and there were concerns the virus could spread further as people flooded into hospitals.

Even as politicians vowed to help Lebanese recover, the government is strapped for cash, and the disaster threatens to further stoke public fury in a country that saw mass protests in recent months.