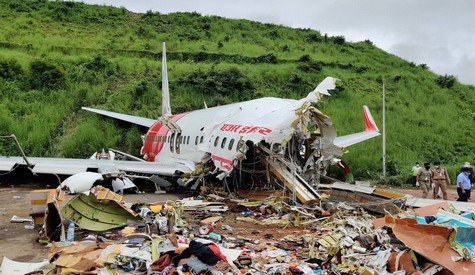 KOCHI, India (AP) — The plane swayed violently as it approached a hilltop runway soaked by monsoon rain, and moments later the special return flight for Indians stranded abroad by the pandemic skidded off, nosedived and cracked in two, leaving 18 dead and more than 120 injured.

Among the injured on Friday night, at least 15 were in critical condition, said Abdul Karim, a senior police officer in southern Kerala state. The dead included both pilots of the Air India Express flight, the airline said in a statement, adding that the four cabin crew were safe.

The 2-year-old Boeing 737-800 flew from Dubai to Kozhikode, also called Calicut, in Kerala. There were 174 adult passengers, 10 infants, two pilots and four cabin crew on board.

In a telephone interview from his hospital bed, Renjith Panangad, a plumber who was returning home for the first time in three years after losing his job at a construction company in Dubai, said the plane swayed before the crash and everything went dark.

He said he followed other passengers who crawled their way out of the fuselage through the emergency exit.

“A lot of passengers were bleeding,” said Panangad, who escaped without major injuries. “I still can’t comprehend what happened. As I am trying to recall what happened, my body is shivering.”

He said the pilot made a regular announcement before landing, and moments after the plane hit the runway, it nosedived.