St. Kitts and Nevis (WINN): Reports of discrepancies and irregularities taking place at the Electoral Office continue to be a major concern in the electoral process in St. Kitts and Nevis for some political parties and their representatives.

On Thursday, July 07, 2022, Mr. Larry Vaughan, an approved scrutineer on behalf of the St. Kitts Nevis Labour Party, highlighted what he alleged to be discrepancies in the electoral process ahead of the 2022 National Assembly Elections expected in the coming weeks.

WINN FM spoke with Mr. Vaughan on Thursday about the alleged discrepancies and irregularities while he was at the Electoral Office engaged in voters’ list management.

He said, “I come to the Electoral Office on a regular basis to check on what is the system…how they are making sure the system goes correctly, the registration, the claims, the objections.”

Mr. Vaughan told WINN FM that he visits the Electoral Office on a regular basis and makes a record of the number of new registrants. He quoted the National Assembly Elections Act (Chapter 2.01), Part 3 (Constituencies and Registration of Voters), section 35 which speaks to scrutineers. 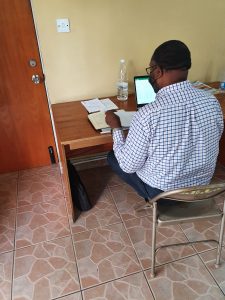 It says, “each political party shall be entitled to nominate in accordance with the prescribed form one person who is qualified as a voter for appointment as a scrutineer in respect of each polling division, and the persons so nominated shall be appointed accordingly by the Registration Officer for the constituency in which the polling division is situated.”

Mr. Vaughan continued: “When I started on June 02, 2022, I did have such access which the law requires. Starting this week, the Supervisor of Elections Mr. Elvin Baily has instructed the staff at the electoral office that I should not get access to the current books so if someone is registered today, as the scrutineer, I cannot see who is being registered. At this close to the election, that is not correct. I asked a member of staff to have Mr. Bailey put that information in writing some days now and nothing has come.

Today [July 07], I got to see Mr. Bailey as he came to the Electoral Office. I asked him about it and his words to me were “Let us agree to disagree”. Well, I will not disagree with Mr. Bailey on the laws of St. Kitts and Nevis and if the law says that I am entitled, it does not mean that he must put hindrances within the way that the process works and so I am bringing it to the people of St. Kitts and Nevis that this time Mr. Bailey, the Supervisor of Elections, has chosen to restrict my access to the Certificates of Registration…and he is saying that when a book of 50 names is completed, no matter how long it takes to be completed to register those 50 names, the scrutineer cannot see those papers.”

WINN FM contacted the Supervisor of Elections Mr. Elvin Bailey for a comment on the matter. Mr. Bailey denied Mr. Vaughan’s claim that he was being denied access to the Certificates of Registration.

Mr. Bailey said, “Mr. Vaughan is not being denied anything. He came in at the beginning of June and he has already covered May, June, and half of July. We are working on July and we have said to him that when the book that we are working on is finished, he can have it. The one that we are currently writing up certificates in, we are not going to stop our process now to give him the book to take it back from him when somebody comes in to register.

Mr. Bailey confirmed with WINN FM that Mr. Vaughan is an approved scrutineer on behalf of the St. Kitts Nevis Labour Party. WINN FM also asked Mr. Bailey if Mr. Vaughan, as a scrutineer, has access to the Certificates of Registration. Mr. Bailey said, “of course. He has had access.

Mr. Vaughan told WINN FM that he has communicated the matter to the St. Kitts Nevis Labour Party for legal advice.