Arrests as Anti-Lockdown Protesters Clash With Police in Sydney 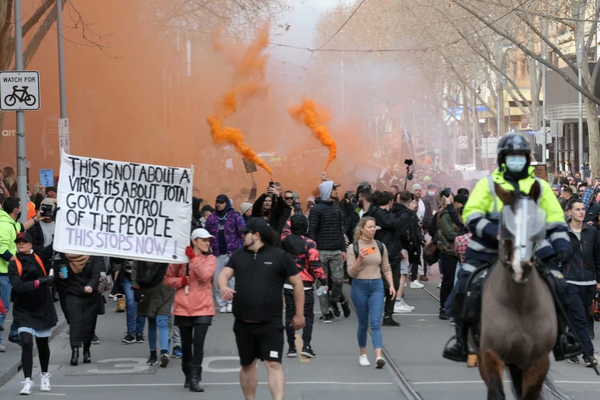 (Al Jazeera) Thousands of anti-lockdown protesters have taken to the streets of Sydney and other major Australian cities to protest against coronavirus restrictions as infections hit a new record and authorities warned of a “growing problem”.

In Sydney, the unmasked participants on Saturday marched from Victoria Park to Town Hall in the central business district, carrying signs calling for “freedom” and “the truth”.

There was a heavy police presence in the city, including mounted police and riot officers in response to what authorities said was unauthorised protest activity.

Police confirmed a number of arrests had been made after crowds broke through barriers and threw plastic bottles and plants.

The New South Wales (NSW) police said it recognised and supported the rights of free speech and peaceful assembly, but the protest was a breach of public health orders.