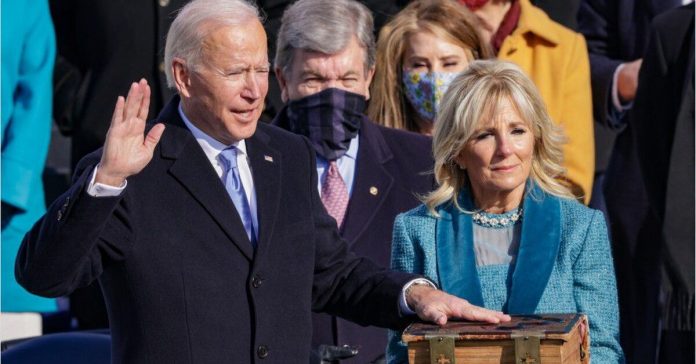 WASHINGTON (Reuters) – Democrat Joe Biden was sworn in as president of the United States on Wednesday, vowing to end the ‘uncivil war’ in a deeply divided country reeling from a battered economy and a raging coronavirus pandemic that has killed more than 400,000 Americans.

With his hand on a five-inch thick heirloom Bible that has been in his family for more than a century, Biden took the oath of office administered by U.S. Chief Justice John Roberts that binds the president to “preserve, protect and defend the Constitution of the United States.”

“Through a crucible for the ages, America has been tested anew, and America has risen to the challenge,” Biden said in his inaugural address. “Today we celebrate the triumph not of a candidate but of a cause: the cause of democracy…At this hour, my friends, democracy has prevailed.”

Biden, 78, became the oldest U.S. president in history at a scaled-back ceremony in Washington that was largely stripped of its usual pomp and circumstance, due both to the coronavirus and security concerns following the Jan. 6 assault on the U.S. Capitol by supporters of outgoing President Donald Trump.