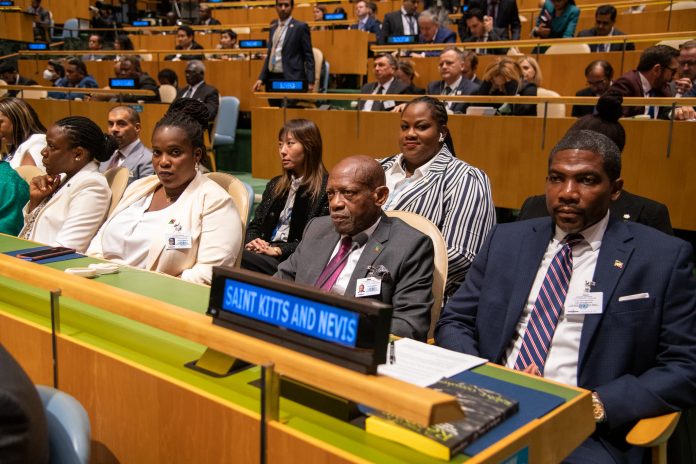 In a recent commentary, Astaphan, a veteran lawyer and former government minister, questioned the presence of a lady in the delegation believed to be associated with Caribbean Galaxy Real Estate, the company constructing the prison at Estridge Estate that was shrouded in controversy under the former administration.

“Sitting in the St. Kitts and Nevis delegation at the UN General Assembly was a female who is a high-level person in Caribbean Galaxy, a Chinese-owned company doing business here and in other Caribbean countries which have CBI [Citizenship By Investment] Programmes.

What was she doing there? Who invited her? Why was she allowed to sit there when our Tourism Minister Marsha Henderson was in New York at the time and the exposure and experience of sitting in the assembly would have done her some good or in the absence of Minister Henderson, why not select a deserving young Kittitian or Nevisian studying in the area to get the exposure and experience?

Why this Chinese lady from Galaxy? What’s going on? She is not a diplomat for the country or is she? And if she is, that needs to be corrected immediately. Neither was she a dignitary or a national icon,” Astaphan said.

The construction of the prison sparked strong public debate and was a hot-button topic during the recently concluded general elections. Joining in the call for clarity on the project was Hon. Shawn Richards, former deputy prime minister, who questioned the approval process and cost after he was dismissed as a member of Cabinet by former Prime Minister Dr. Timothy Harris.

“Imagine how Kittitians and Nevisians felt and still feel about the leader of this Chinese company that did the prison deal with the Harris administration sitting in the general assembly. A deal which you will remember caused great anger and outrage in St. Kitts to the extent that it became a major issue for voters in the August 5 elections. Imagine this woman sitting at the UN as part of the delegation of a country whose citizens and residents, whose voters, rejected this prison deal with angry and outraged clarity. Incidentally, some Galaxy people were also present at the swearing-in ceremony of the new Cabinet.”

WINN contacted Press Secretary to Prime Minister Dr. Terrance Drew, Mrs. Adelcia Connor-Ferlance, who said that there was no Asian lady part of the St. Kitts and Nevis delegation at the U.N. General Assembly.

According to Connor-Ferlance, the lady in question is Ms. Ying Jin, a citizen of St. Kitts and Nevis, who attended at the invitation of the Minister of Foreign Affairs as a guest.