At least one dead, Vancouver port closed in Canada floods 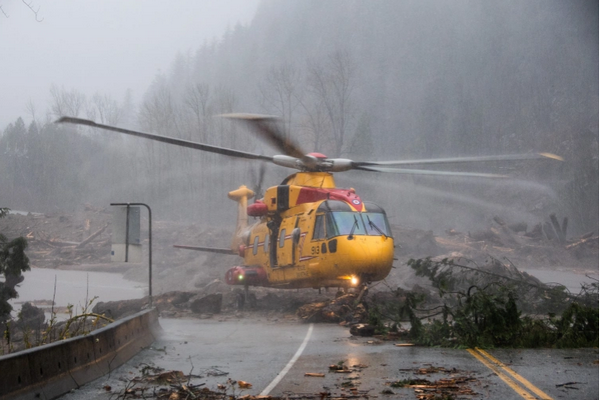 (Al Jazeera) At least one person has been killed as torrential rains triggered landslides and floods in western Canada, forcing the closure of the country’s busiest port in Vancouver.

The Royal Canadian Mounted Police (RCMP), Canada’s federal police force, confirmed on Tuesday that at least one woman died after mudslides blocked a major highway in the province of British Columbia. The flooding has also closed several highways in and around the greater Vancouver area, a major coastal city that is home to nearly 2.5 million people.

Port authorities announced on Tuesday that they had suspended rail routes operated by Canada’s two largest rail companies – Canadian Pacific Rail and Canadian National Railway – because of the floods.

“All rail service coming to and from the Port of Vancouver is halted because of flooding in the British Columbia interior,” said port spokesperson Matti Polychronis.

The storms temporarily stopped much of the movement of wheat and canola from Canada, one of the world’s biggest grain producers. It is not clear how long it will be before rail access to the port is restored.

Nearly 300 people trapped by mudslides were rescued by helicopters in British Columbia late on Monday.

“Trapped between two slides are approximately 275 additional people, including 50 children, who were advised to shelter in place overnight as debris was unstable and unsafe to cross,” the City of Vancouver and Canada Task Force 1 said in a joint statement.

Earlier on Monday, authorities in Merritt, some 200km (124 miles) northeast of Vancouver, ordered all 7,100 citizens to leave after rising waters cut off bridges and forced the wastewater treatment plant to close.

The towns of Chilliwack and Abbotsford, east of Vancouver, also ordered partial evacuations on Tuesday.

Some areas received 200mm (8 inches) of rain on Sunday – the amount they usually see in a month – and the deluge continued on Monday, with roads covered by mud or up to 250mm (10 inches) of water.

In the United States, thousands experienced power outages because of the heavy rain in Washington state, just south of British Columbia. Nearly 50,000 customers remained with no power on Tuesday; as many as 158,000 customers had lost power at the height of the storm on Monday in the state.

One person in the small town of Everson, north of Seattle, has gone missing after being swept away by floodwaters.

British Columbia and the US northwest have been frequently experiencing extreme weather events that experts partly blame on global warming. The region saw large wildfires and record temperatures over the summer in a heatwave that killed hundreds of people.