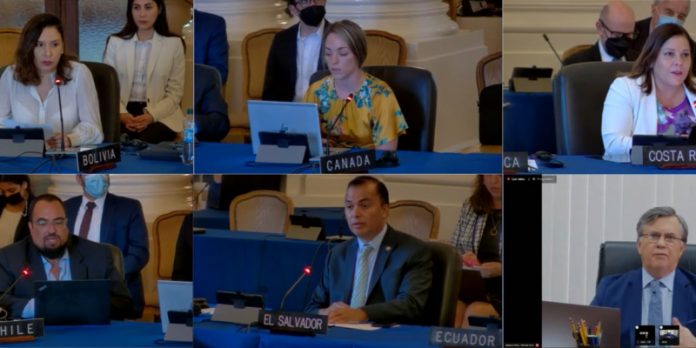 San Jose, 19 August 2022 (IICA) – The Director General of the Inter-American Institute for Cooperation on Agriculture (IICA), Manuel Otero, presented the 2021 Annual Report to the Permanent Council of the OAS, describing the specialized agency’s efforts to foster agricultural production, rural development and food security in the Americas, and emphasizing the sector’s contributions to global environmental sustainability.

At the meeting, Otero highlighted the strategic importance of agriculture’s economic, social and environmental contributions “for the life and future of our continent”. He also noted that, at the upcoming Conference of the Parties (COP 27) to the United Nations Framework Convention on Climate Change, to be held in November in Egypt, IICA will support countries of the Americas in demonstrating that their agrifood systems are not flawed, “but can be improved, and that, thanks to the work of producers, science and innovation, many positive changes are taking place in agriculture and rural areas of the Americas”.

Manuel Otero also described IICA as a knowledge management platform, with a more “integrated and coordinated” business model. He explained that the Institute establishes “mechanisms to engage in dialogue with all stakeholders in agrifood systems”, which enables it to serve as a “bridge and advocate for collective action to transform” those systems.

In that regard, he indicated that investment is crucial to modernize agriculture, strengthen research and innovation systems, incorporate science and technology into production processes, and develop a new generation of public policies and institutional frameworks to transform threats into opportunities.

Following the presentation, ambassadors and representatives to the OAS supported and endorsed IICA’s actions, underscoring their importance in modernizing regional agrifood systems and coordinating countries’ efforts to position agriculture of the Americas as a key player in addressing the greatest global challenges, including climate change.

“I congratulate IICA on its hard work to improve food security and well-being in the Americas. Canada greatly values the Institute’s technical capacity to design and implement food security projects in the hemisphere. We share its vision for science-based agrifood trade and a powerful renewal process that fosters competitive agriculture, to ensure that our farmers have the tools they require for sustainable production”, remarked Véronique Dulude, Alternate Representative of Canada to the OAS.

“Canada believes that IICA has a key role to play in promoting biotechnology as one of the tools available to producers throughout the region. We reiterate our eagerness to continue collaborating with IICA to improve producers’ sustainability and food security in the Americas”, she added.

In turn, Alejandra Solano, Ambassador and Permanent Representative of Costa Rica, thanked IICA for supporting actions in her country, including a proposal for agricultural insurance for the Central American region; a project aimed at digitalizing cooperatives through technology transfer and innovative practices; the Digital Fabrication Lab (FabLab), which has benefited more than 160 users; and the work carried out within the framework of the Adapted Agroforestry Systems for the Central American Dry Corridor (AGRO-INNOVA) project.

“Once again, we recognize IICA’s commitment to achieving these objectives. Agriculture’s strategic importance at the global level has become evident over the past few years. As the Director General said, agricultural production is an essential, key link in agrifood systems transformation. Science provides fundamental input for adequate policymaking, and agriculture is part of that solution”, explained Solano.

“We are grateful for IICA’s work to drive, foster and support Member States’ efforts to achieve agricultural development and rural well-being through international cooperation of excellence. This demonstrates the importance of having an efficient model, capable of mobilizing the knowledge available in the region and the world, in order to achieve a knowledge-intensive, competitive, inclusive and sustainable agriculture sector that can capitalize on opportunities to contribute to the economic growth and rural development of our countries”, added Kraljevich.

Agustín Vásquez, Ambassador and Permanent Representative of El Salvador, underlined IICA’s support for his country’s Master Plan for Agricultural Recovery, “coffee program, legume production and other initiatives as part of a strategy to increase food security and reduce the country’s dependence on imports”.

“We are betting on the plan to drive the economic reactivation of the agriculture sector. Its objective is to foster investment, productivity, diversification and value adding through innovation and the sector’s modernization, with a view to improving its profitability and competitiveness within a framework of environmental sustainability, in which IICA has played a key role”, said Vázquez.

Cecilia Urquieta, Counselor and Alternate Representative of Bolivia, concluded that IICA “has played an important role in strengthening public policies aimed at guaranteeing the country’s food sovereignty”, and listed the assistance received by the country’s Ministry of Rural Development and Lands in modernizing agricultural processes through access to technologies in 98 municipalities, implementing a communal bio-inputs plant to improve yields and reduce production costs, and building the capacities of producers and technical specialists through courses and other marketing, leadership, innovation and precision agriculture tools.

“We express our gratitude to IICA for the work it has carried out. We value its work within the Inter-American System, which greatly contributes to guaranteeing the food sovereignty of our peoples and meeting the 2030 Agenda to end hunger, achieve food security, improve nutrition and foster sustainable agriculture in the Americas and the Caribbean”, concluded Urquieta.

About IICAIICA is the specialized agency for agriculture in the Inter-American system, with a mission to encourage, promote and support its 34 Member States in their efforts to achieve agricultural development and rural well-being through international technical cooperation of excellence.