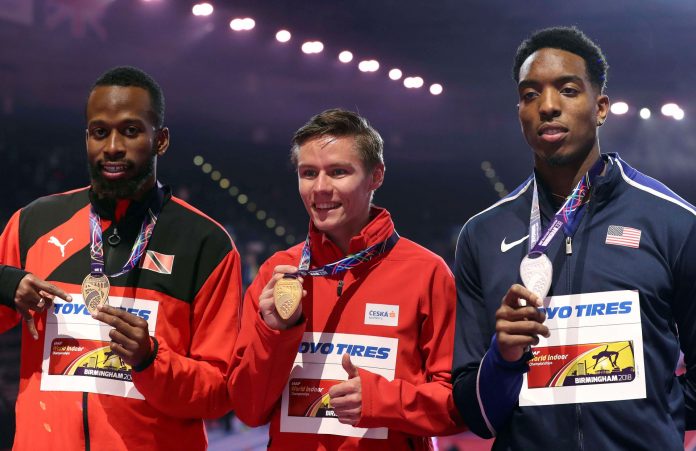 The 29-year-old Olympic and World 4×400 metres bronze medallist died in a car accident in Texas in the United States on Monday night.

President Weekes stated that as patron of the TTOC, she extends condolences to the family, friends and fellow athletes of Lendore, continuing in the post, saying: “It can be said that Mr Lendore has fought the good fight and finished the race. It is up to us now to keep the faith by honouring and emulating his sterling achievements. Deon, a grateful, grieving nation wishes you eternal peace.”

Prime Minister shared that he was “shocked and saddened to hear of the untimely passing of Olympic and World medallist sprinter”.

“I extend heartfelt condolences to his family and join the national community in mourning.”

According to an online news report on ABC13 about the accident, Lendore, later identified, was one of two people who died following a head-on crash involving multiple vehicles in north Houston.

It said: “Police said the crash happened Monday at 7.10 pm in the 11600 block of Bannister Lane. A Dodge truck was heading westbound on Little York, when the driver lost control, crossed the median and struck a Kia, which hit a tow truck that was towing another car.

“A neighbour told ABC13 he heard four crashes right outside his house. He said he ran outside and called 911.

“According to police, a woman that was ejected from the Dodge truck was pronounced dead at the scene. Meanwhile, the driver of the truck suffered minor injuries and was taken to the hospital.

“The second person killed (Lendore) was the driver of the Kia. No other injuries were reported.

“Police believe speed played a factor in the crash, but are still investigating.”

Lendore was a three-time Olympian, who anchored T&T to a bronze in the men’s 4×400 metres relay at the 2012 London Games in England. He also claimed two World Indoor 400m bronze medals in Birmingham, England in 2018 and 2016 in Portland, USA, also bagging a bronze in the 4x400m.

Sports Minister Cudjoe stated that “on behalf of the Government and people of T&T, we salute Lendore for his tremendous contributions to the development and promotion of athletics. Lendore was truly an inspiration to all of us and has proudly represented this country. He epitomised hope and joy each time his feet landed on the track. He was indeed a trailblazer, a life gone too soon. We thank him for everything he has done and for giving distinguished and diligent service to T&T. May his soul rest in eternal peace.”

On Facebook, Persad-Bissessar posted: “The news that Olympic hero Deon Lendore has tragically passed away has met me with tremendous sadness. A three-time Olympian Deon made every citizen of our nation proud when he brought home the bronze medal in the 4x400m in London 2012.

“T&T has sadly lost an outstanding athlete and a true national hero. I extend my deepest condolences to Deon’s family and friends as well as to all those in the track and field fraternity.”

Of the three-time Olympian – representing at the 2012 London Olympic Games, the 2016 Olympic Games in Brazil and the Tokyo Olympic Games in Japan last year – Lewis in a video tribute said: “There are no words to describe this loss. Deon Lendore has been an inspiration to many young people, not only in track and field, but in T&T. His commitment to country to his team, to his friend, to his family and to his colleague and to his sport has been enormous. He has been someone who regardless of adversity and obstacles, he has persevered. He has been very committed to Team TTO.”

“I extend sincerest and deepest condolences to his family, to his friends, to his colleagues, to his club in T&T Abilene (Wildcats), we at the TTOC has had a very close relationship with Deon over the years and for me to simply say the words, may he rest in peace, is surreal. Deon Lendore gone too soon, rest in eternal peace young man, only God knows.”

Lendore of Arima, who attended Queen’s Royal College (QRC) and the Texas A&M University, leaves to mourn his mother and sister.