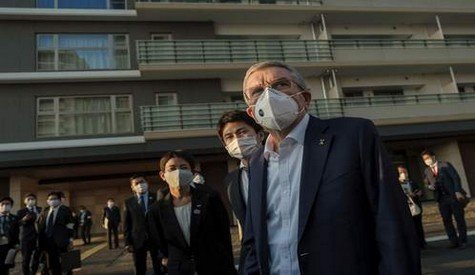 TOKYO (Reuters) – International Olympic Committee President Thomas Bach said on Tuesday that athletes would not be forced to get COVID-19 vaccinations ahead of the Tokyo Olympics, but he said they should as a “demonstration of solidarity” with the Japanese.

Bach visited the Athletes’ Village on Tuesday before concluding his two-day Tokyo trip with a visit to the National Stadium.

“We will encourage athletes that whenever possible they have the vaccination because it is better for their health, and it is also a demonstration of solidarity with their fellow athletes and also the Japanese people,” said the German.

Bach’s trip, his first to Japan since the decision to postpone the Games in March, has been up-beat throughout and he has spoken about the great impact a vaccine could have on Tokyo’s ability to host the Olympics next year.