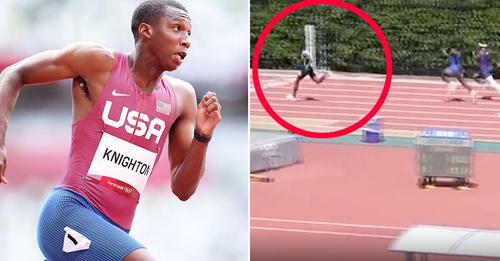 The 18-year-old once again lowered Bolt’s junior world record and beat his own U/20 world mark of 19.84sec in a scorching run at the Baton Rouge meet in the United States on Saturday.

Knighton blitzed the field to run home first in a staggering 19.49 seconds, setting the fourth-fastest time in the history of the event in the process.

Knighton will have his sights set on the world outdoor championships in Eugene, Oregon, (July 15-24) provided he comes through the qualifiers (June 23-26) at the same venue.

The American made headlines around the world last year when he ran an astonishing 19.88 to break Jamaican Olympic legend Bolt’s 19.93 world junior record.

He then finished fourth in the 200m final behind Canada’s Andre de Grasse at the Tokyo Olympic Games.

However, Knighton’s time over the weekend is way ahead of where Bolt was prior to turning 20 – with the eight-time Olympic gold medallist clocking 19.93sec.

Bolt only managed to breach the 19.5 mark at the age of 21 – leaving Knighton in a league of his own at such a tender age.

The 18-year-old’s time blitzed those of sprint legends Carl Lewis and Tommy Smith and places him behind only Jamaica’s world record holder Bolt (19.19sec), another Jamaican Yohan Blake (19.26) and American Michael Johnson (19.32) as the fastest men ever over 200m.