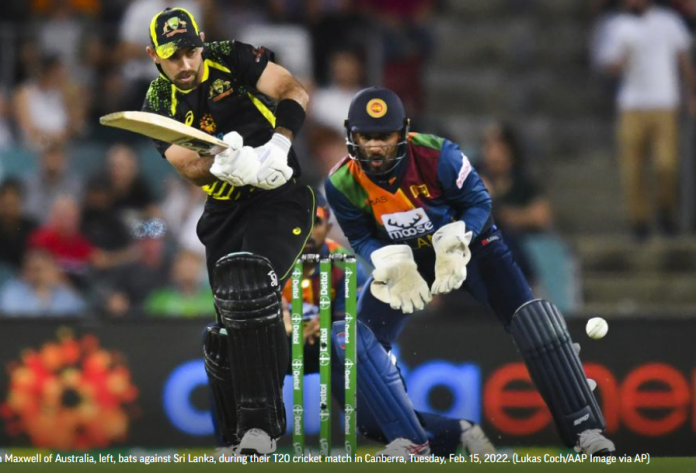 MELBOURNE, Australia (AP) — Player of the match Glenn Maxwell scored 48 runs from 39 balls to pace Australia to a six-wicket win over Sri Lanka on Friday at the Melbourne Cricket Ground, the home team’s fourth consecutive win in the five-match Twenty20 series.

Maxwell brought up the winning runs with a powerful pull shot that raced to the long MCG square boundary to seal the victory with 11 balls remaining.

Josh Inglis chipped in with 40 runs from 20 balls to help Australia reach 143 for four in reply to Sri Lanka’s 139 for eight. Inglis and Maxwell put on a match-winning 71-run stand for the fourth wicket.

After being sent in, opener Pathum Nissanka scored 46 from 40 balls for Sri Lanka. But once Nissanka departed in the 16th over, it started a collapse of 5-9 as Australia took control of the match.

Richardson came in for his first game for Australia since the second test of the Ashes against England in December, with fast bowlers Mitchell Starc and Josh Hazlewood resting before the tour of Pakistan next month.

Australia is using the last two games to tinker with its lineup to prepare for its Twenty20 World Cup home defense in October. The final game of the series is Sunday, also at the MCG.

Australia won the first game against Sri Lanka by 20 runs and the second in a Super Over in Sydney on Sunday after the scores were level at the end of the regulation overs. Australia won the third game by six wickets on Tuesday in Canberra.