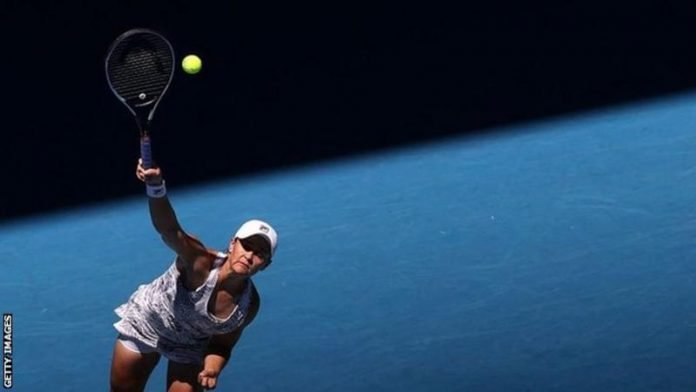 World number one Ashleigh Barty says continuing to live like a “hermit” is helping her breeze through the Australian Open draw.

Japan’s Osaka won the first set in 20 minutes but lost her way in the second before securing a 6-0 6-4 victory.

Anisimova beat Olympic gold medallist Belinda Bencic 6-2 7-5 and has yet to lose a match this season.

Another serving masterclass from Barty

As she aims to become the first home champion since 1978, Barty says trying to avoid coronavirus, as rates rise in Melbourne, has not affected her.

“For us, it’s pretty low-key anyway,” she said.

“We come and practice and do what we need to do. Otherwise, a good book and a coffee and I’m set.”

The two-time Grand Slam champion has not dropped a game on her serve at Melbourne Park this week, beating Bronzetti in 52 minutes to back-up another emphatic win in the first round.

On Monday, the 2021 Wimbledon champion dropped one game as she thrashed Ukraine’s Lesia Tsurenko in 54 minutes.

Barty has started the 2022 season by winning all six of her matches, having lifted the Adelaide International title last week.

Trial for US basketball star begins in Moscow-area court

Another Minister of Government in Anguilla resigns over GST

Inside The News - 2 July 2022Inside The News - Hosted by Kevon - Saturday from 11am to 1:30pm on our YouTube, Facebook, Twitch and Periscope or listen on 98.9FM. WINNMedia began operations as WINN FM 98.9 in St Kitts and Nevis back in May 2002.Follow us at:WEBSITE: www.winnmediaskn.com/FACEBOOK: WINN MEDIA SKN INSTAGRAM: www.instagram.com/winnmediaskn/ TWITTER: twitter.com/winnmediasknJoin the growing WINNMedia Family and get your dose of new videos every day! ... See MoreSee Less

NIA bringing relief to non-national community on Nevis with amnesty on arrears for work permits and residencies, reduced fees, other policies - https://www.winnmediaskn.com/?p=26323

Shawn Richards @sdyptshawn joins yours favs in the

Ladies and Gentlemen, boys and girls, one and all,