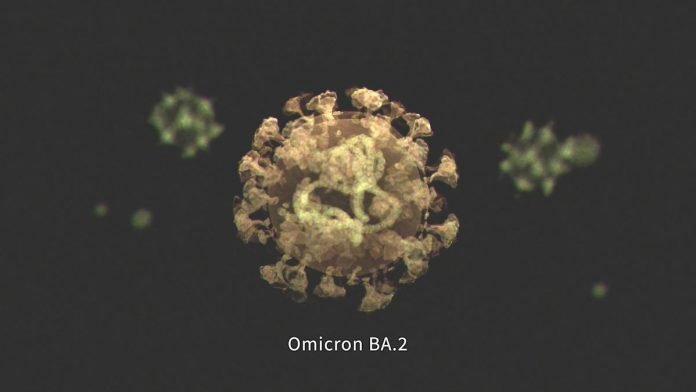 St. Kitts and Nevis (WINN) – Omicron is still the dominant strain of the COVID-19 virus but is likely to be overtaken by its subvariant BA.2 according to officials from the World Health Organisation (WHO) on Wednesday (March 23).

The official word is still out on when BA.2 — which is 30 percent to 60 percent more contagious than the original Omicron variant — will become the dominant strain globally.

But based on transmissibility and the trend of past variants that were more transmissible (Delta, Omicron), it seems likely that BA.2 will overshadow Omicron in the coming months.

BA.2 has been dubbed the more contagious cousin of Omicron and has spread through Europe and other parts of the world, representing 30 percent of new infections in the Mid-Atlantic region of the US, according to the Centers for Disease Control and Prevention (CDC).

Currently, the BA.2 variant does not show signs of causing more severe disease or that it dramatically evades vaccine protection; however, Anthony Fauci, Chief Medical Advisor to the President of United States, predicts that the U.S. would not see a significant surge in severe disease even if there is an uptick in cases.

However, the World Health Organisation continues its mandate of caution.

With restrictions on movement getting closer and closer to pre-COVID-19 times and transmission of the virus is alive and well, people who have not been infected by omicron, who are not vaccinated or who are immunocompromised, are more vulnerable.

Dr Michael Ryan, Executive Director, WHO Health Emergencies Programme and epidemiologist, shared during the March 23 briefing shared that transmission in many countries has taken off again.

Should we be concerned about BA.2 and its high rate of transmissibility?

According to Dr Ryan, countries are coping based on the vaccination rate of some, especially the most vulnerable.

“So what we see is countries coping with that opening up… when you open up as quickly as some countries have, you will get that bounce in transmission. If you add to that the increased transmissibility of BA.2, then you get a double impact, a double effect. But again, we’re seeing that in countries with high levels of vaccination, especially in those most vulnerable, we’re not seeing that translate into pressure on the health system, into high rates of hospitalisation and high rates of death.”

The epidemiologist said that while they cannot control how the virus evolves, good tracking, surveillance and focus on vaccination and reducing spread show that countries are not experiencing a strain on healthcare systems even with increased cases.

BA.2 has been found in Trinidad and Tobago but has not been confirmed elsewhere in the Caribbean region.

Locally, the Federation of St. Kitts and Nevis is out of the thralls of the fourth wave of transmission caused by the Omicron variant.

The last COVID-19 report disseminated on March 23 showed that there were currently zero active cases in the Federation.