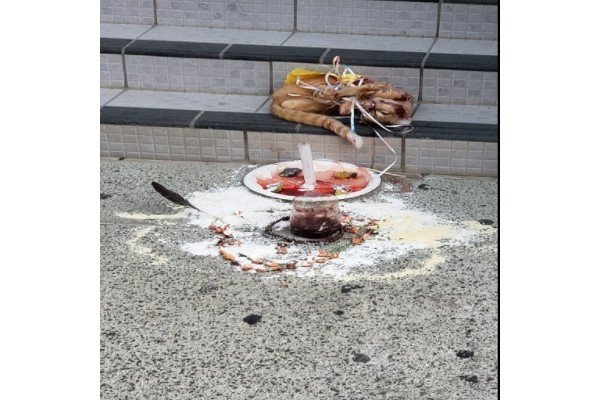 (Loop News) Customers and employees of the Financial Center on Bridge Street, Castries, were left in shock following the discovery of what appeared to be a witchcraft ritual at the entrance to the building which houses the Inland Revenue Department and Bank of Saint Lucia.

“When we arrived this morning, we were greeted with a dead cat which was tied up, a container with blood, a candle…sacrifice kind of thing,” a shaken Bank of Saint Lucia employee explained.

One employee who spoke to Loop News on condition of anonymity, says the discovery has left employees on the edge and concerned.

“Everybody thinking is a bank employee that is being targeted, or somebody did another person wrong, and the individual is seeking revenge. You can see upon the faces of some of the staff that they are frightened, others are not so visible, but you can tell they are scared,” the employee stated.

Both staff and customers took several photos of the alleged sacrifice before it was removed.

Bank of Saint Lucia has refused comment on the incident.