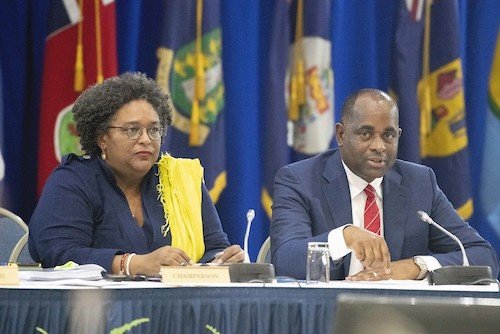 A joint press briefing video between Barbados and Dominica showed a non-commercial RSS aircraft at the Grantley Adams International Airport where it delivered nine boxes of the vaccine which contained 100,000 doses according to Mottley.

Mottley also stated that the vaccines would be shared with the OECS member states, including St. Kitts-Nevis.

“Let me say out front, that Prime Minister Skerrit and myself have worked very closely on this, and I really want to thank him because he also given the length of tenure that he has had in office, has been able to work closely with me to ensure that we were able to benefit from this. But as we benefit we’ve also agreed that members of the OECS and indeed in Barbados’ case Trinidad and Guyana who have helped us over the course of the last year, believe you me, nobody has gone through this without seeking assistance.

“And therefore both of us have agreed that some of the vaccines which we have received will go to our brothers and sisters in those territories within the OECS, with Dominica taking care of some, Barbados doing some and Trinidad and Guyana as a result of the work that has been done closely with our people in Barbados.”

Later in the press briefing, the feed switched to Dominica where Prime Minister Roosevelt Skerrit expressed that they too will be sharing the vaccine with OECS Member States.

“Just to say to my dear brothers and sisters in Dominica that in the spirit of our usual togetherness and brotherly love, Dominica will be sharing with a couple Member States of the OECS from this gift which we received from India. And so arrangements will be made to have some of the vaccines airlifted as early as Thursday to some of our brothers and sisters so that their frontline workers can be vaccinated in our effort to stamping out this dreaded virus.”

According to an article on the BBC, “the Oxford-AstraZeneca vaccine is being manufactured locally [in India] by the Serum Institute of India, the world’s largest vaccine manufacturer … producing more than 50 million doses a month.”

The vaccine had also adopted the nickname Covishield.

The RSS aircraft subsequently left the Grantley Adams International Airport for the republic of Dominica with six boxes of vaccines containing 70,000 doses of vaccines.

Mottley explained that this was possible because of the long standing and solid relationship between Barbados and India citing the country as one of the first to recognize Barbados’ independence.

Like Barbados, Dominica would also be expecting the second batch of doses in six to eight weeks; however, the exact time has not been set as they are still in negotiations with the government of India.

In his remarks, Prime Minister Skerrit after mirroring Mottley’s gratitude towards the government and people of India stated that the first doses of vaccines are expected to be delivered from February 22.

Conversely, Mottley stated that she expects rollout of the vaccine as early as this weekend (February 12-14).

Both Mottley and Skerrit mentioned that the vaccine is not mandatory but urged citizens of the importance the vaccine has in the fight against COVID-19. Mottley also reminded the people of Barbados that vaccines are a normal part of the medical culture citing that Barbadians have taken vaccines to fight off several diseases.

Watch the full Press Briefing below: