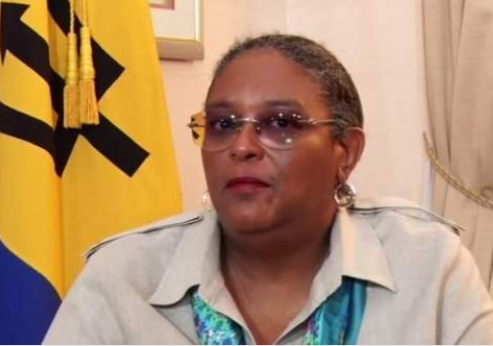 BRIDGETOWN, Barbados (CMC) — Prime Minister Mia Mottley disclosed to the nation Thursday that she was among eight people here who recently received COVID-19 vaccines, and reported that in a few weeks more frontline workers and vulnerable residents could get theirs too.

The inoculations were not done publicly, as has been the case in some other countries, but the Barbadian leader said she, along with Minister of Health Lt Col Jeffrey Bostic, Attorney General Dale Marshall and five frontline medical workers received their first jab of the two-course vaccine in “the last few days” and would get the second in a few weeks.

“My arm is a little sore, but other than that I am in good shape,” she said during a media briefing to update the nation on the COVID-19 situation.

Mottley said Minister of Foreign Affairs Dr Jerome Walcott, who is also Chairman of the Cabinet Sub-Committee on COVID-19, was continuing to work feverishly to get access to the vaccine for the wider population from several suppliers.

“We’ve had meetings every day this week…with different groups,” she reported.

The prime minister said Barbados expects to receive vaccine doses through the COVID-19 Vaccines Global Access Facility (COVAX Facility) which has been organised by the World Health Organization (WHO) to make available two billion doses of safe and effective inoculations by the end of this year.

“We expect that to give us the equivalent of 20 per of our population but we recognise that most of that is likely to be spread out over the course of the whole year…. The initial disbursement is likely to be three per cent of the population,” she said.

“But even without that, they have indicated to the Ministry of Foreign Affairs and the Ministry of Health that we may get an emergency amount for our frontline workers and for the most vulnerable by the end of January, early February that will allow us to be able to start to bring down the temperature in the country.”

Mottley said her government was also working on other avenues to source vaccines.