Barrett Sworn In At Court As Issues Important To Trump Await 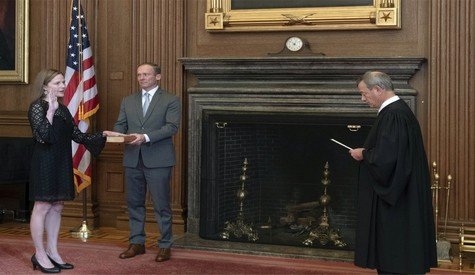 WASHINGTON (AP) — Amy Coney Barrett was formally sworn in Tuesday as the Supreme Court’s ninth justice, her oath administered in private by Chief Justice John Roberts. Her first votes on the court could include two big topics affecting the man who appointed her.

The court is weighing a plea from President Donald Trump to prevent the Manhattan district attorney from acquiring his tax returns. It is also considering appeals from the Trump campaign and Republicans to shorten the deadline for receiving and counting absentee ballots in the battleground states of North Carolina and Pennsylvania.

It’s not certain Barrett will take part in any of these issues, but she will make that call.

Barrett was confirmed Monday by the Senate in a 52-48 virtual party line vote. She is expected to begin work as a justice on Tuesday after taking the second of two oaths required of judges by federal law. No justice has assumed office so close to a presidential election or immediately confronted issues so directly tied to the incumbent president’s political and personal fortunes.