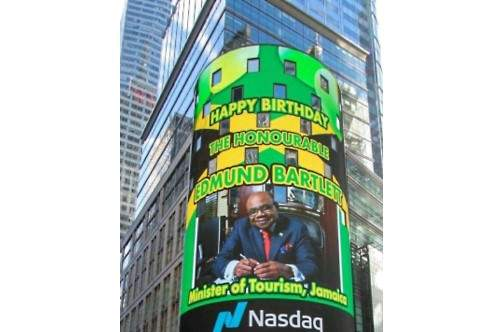 Jamaica (Jamaican Observer): TOURISM Minister Edmund Bartlett yesterday slammed those behind a social media post that claimed taxpayers’ money had been used to pay for an ad in Times Square, New York, wishing him happy birthday.

“The backlash [on social media] is from wutliss people, bad mind people. If you want to ask a question, ask it. But don’t go and say that it is government money or anybody’s money because you don’t know. So if you have a concern, ask a question, just like how you’re asking now. You don’t go and make pejorative statements about people and what they have done [when] you don’t know,” he told the Jamaica Observer yesterday.

The suggestion that taxpayers’ money had been used for the ad was nonsensical, he argued.

“Why would anybody be putting up their picture in Times Square for birthday? It doesn’t make sense. How could you do that? How would that be justified anywhere or place?” Bartlett added.