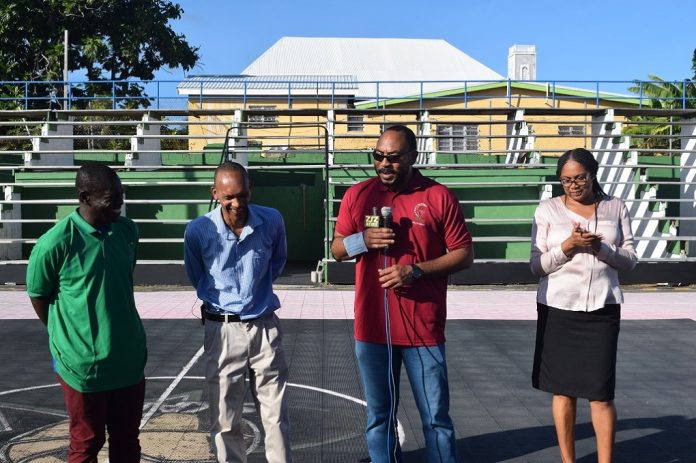 Basseterre, St. Kitts (SKNIS): Basketball City in Basseterre is sporting a new look thanks to an expanded upkeep project implemented by the Department of Sports.

The interior and exterior of the premier basketball facility were repainted, while the wooden bleachers were replaced with aluminium bleachers. Nearby trees were trimmed, and other general improvement activities were carried out.

Minister of Sports, the Honourable Jonel Powell, surveyed the work at Basketball City on Friday (January 22, 2021). While there, he was greeted by Glenville Jeffers, President of the St. Kitts Amateur Basketball Association (SKABA). Mr. Jeffers thanked Minister Powell and the department staff for transforming the look and feel of the facility.

“I am quite pleased, and I am sure the basketball players and the fans will be pleased with how aesthetically clean and colourful … Basketball City looks,” Mr. Jeffers said. “It would be more appealing for people to come to Basketball City,” he added, noting that the junior teams had already begun competition, while the seniors were preparing to kick off their season shortly.

Minister Powell highlighted the positive relationship between the Department of Sports and SKABA and pledged additional support.

“This is just part of the ongoing partnership that we hope to maintain with SKABA and part of the general maintenance and upkeep programme that we want to have in the Department of Sports, not just for basketball but for all of our sporting facilities across the island,” he stated.

Other improvements to be carried out at the premier basketball facility will see the resurfacing of the basketball court, replacement of the backboard and rings as well as the installation of adjustable basketball frames. The new frames will be useful in teaching the game to a younger generation as the ring can be lowered to a suitable height.

The minister said that the long term plan is to build a new home for the sport.

“The ultimate goal is for us to have a proper indoor facility in St. Kitts and Nevis,” Honourable Powell indicated. He referred to the economic challenges that St. Kitts and Nevis and the rest of the world are facing due to the COVID-19 pandemic and said it would be impractical to expect such this year.

He expressed that “it is still on the table and it is something that I intend to achieve as the Minister of Sport here in St. Kitts and Nevis.”

ST JOHN'S, Antigua – The Technical Committee for the CG Insurance Super50 Cup has approved squad replacements ahead of the Semi-Finals and the playoff...
Read more
Sports

LOS ANGELES (AP) — In a career filled with remarkable comebacks, Tiger Woods faces his toughest recovery of all. Woods was driving through a sweeping,...
Read more
Football

St. Paul’s Off The Mark In Title Defence

Apart From the Health Benefit, What are the Side Effects of Taking the COVID-19 Vaccine?

PM Harris Reminds the Nation of the Importance of Vaccination

Missed the bench meeting on Sunday? Heres a snippet.Head over to our YouTube page for full interview.#thebenchmeeting #WinnMediaSKN ... See MoreSee Less

Staff Knuckle Down as Hospitals Buckle Under COVID - https://www.winnmediaskn.com/?p=9276

#Repost Okay....normally I would promote the sho

Now that the vaccine rollout has started in St. Ki

It is unclear just how many people in the Caribbea

With the increasing use of technology among the po