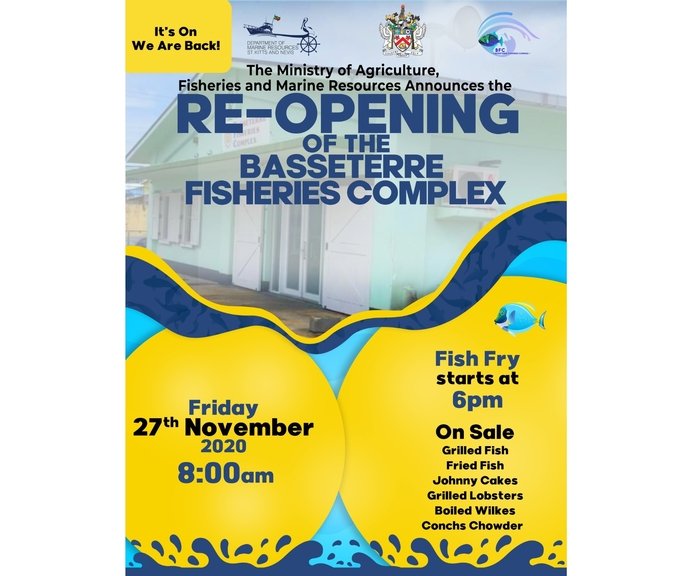 Basseterre, St. Kitts (SKNIS)– The Ministry of Agriculture, Fisheries and Marine Resources closed the Basseterre Fisheries Complex (BFC) on October 30, 2020, due to concerns about the extent of fish poisoning from fish sold at the complex. This decision was taken as a precautionary approach and to provide an opportunity for the testing of fish and to institute remedial, corrective, and preventative actions to ensure the efficiency of the complex.
Since the closure of the BFC, fish samples were sent for testing to the Bureau of Standards to determine the type of poisoning. The BFC has revised its operational procedures and standards and has enhanced its food safety measures to ensure it minimizes any contamination of its products. All members of staff have been re-trained and re-tooled in these new systems. The Complex has also been sanitized and a schedule of regular sanitizing has been implemented.
In addition, the Management of the BFC conducted a forum with fish suppliers on the revised procedural and operational standards to provide awareness of the fishing sites that are of concern with regards to the fish poisoning. It was also found that some of the problems at the fisheries were a result of managerial deficiencies. A new Acting Manager has been assigned and staff development sessions have been conducted.
Samples of fish were sent to the Bureau of Standards for testing. The Bureau advised that fish samples were submitted for testing at their partner accredited lab, EMSL Analytical in New Jersey.
The test results from the Bureau of Standards indicate that there were no issues in relation to the fish handling or food preparation process. However, it indicates that there were elevated levels of arsenic in the fish samples. The Bureau of Standards has advised that inorganic arsenic in fish should be 0.043 mg/kg at maximum; while the total for arsenic (organic and inorganic) should be 1.48mg/kg at maximum. The results underscore the need to maintain clean marine environments with minimal pollutants which can cause adverse effects on human health.
The Bureau of Standards has also concluded that the sampled fish did not come from our waters but the results support the view that these fish were caught outside of our waters. In an effort to ensure food safety, the Ministry has terminated both the
arrangements made by the previous BFC management for imported fish sold to the BFC and for private fish processing done at night.
As part of the revised protocols, all fishers supplying fish to the BFC must submit an application to the BFC. This application will be reviewed by the Department of Marine Resources to verify that the supplier is in compliance with the fisheries laws of the Federation. Upon successful review, the supplier will be issued a permit to supply fish to the BFC in accordance with conditions outlined in the application.
The Ministry of Agriculture, Fisheries and Marine Resources is working with the Bureau of Standards to increase its response to health and nutritional concerns of the sector. The Ministry’s proposed Food Quality and Nutrition Security project looks at procuring fish testing equipment to determine the areas that have a propensity for fish poisoning. The Ministry is also seeking to implement an additional project, which considers farming fish in controlled environments which would lower the risk of fish poisoning while improving livelihoods and food security.
The Basseterre Fisheries Complex was reopened on Friday 27th November 2020 under new management and with revised operating systems. The Ministry wishes to thank the general public for its patience and support and assures all that the Complex will remain vigilant in ensuring food safety and food security.