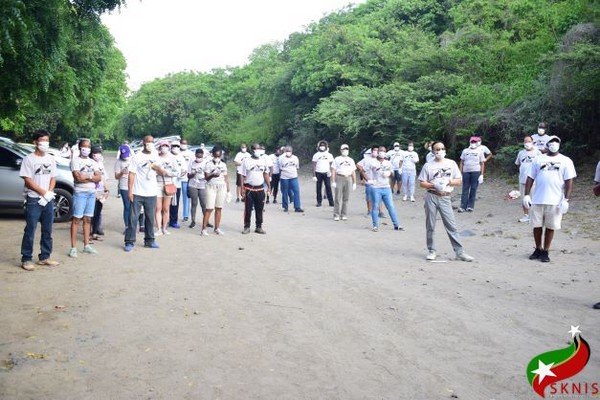 Basseterre, St. Kitts (SKNIS): This year marked the second consecutive year that the Embassy of the Republic of China (Taiwan) in St. Kitts and Nevis celebrated its National Day which is observed annually on October 10, with an environmental beach cleanup, an activity Ministers of Government in the Federation described as a significant contributor to cleaner and healthier environments.

The environmental cleanup, which was held at South Friar’s Bay on the South East Peninsula on Saturday, October 09, came as a result of the ongoing threat posed by COVID-19. It replaced the usual cocktail reception in celebration of the 110th National Day of the Republic of China (Taiwan) observed in the Federation St.Kitts and Nevis.

“Activities like these help us to continue to keep our environment, beaches and surroundings clean. We know that the healthier and cleaner our environment is, the healthier we are as a people and as a nation,” said the Honourable Eric Evelyn, Minister of Environment. “Of course, we know that we are a tourist destination, but we must also be aware that we need to keep St. Kitts and Nevis clean for us as nationals and residents as well.”

Minister Evelyn added that activities centred around environmental cleanups “continue to build and foster the great relationship” between St. Kitts and Nevis and the Republic of China (Taiwan).

The Honourable Lindsay Grant, Minister of Tourism, shared similar sentiments and thanked the Government and people of Taiwan for such a timely and important initiative.

“We are not just doing it for the people who would come into St. Kitts and Nevis for tourism purposes but first and foremost for ourselves,” said Minister Grant. “I think it is a great opportunity to not only do it for ourselves but to spread the message and the word that it is very important for us to have a clean and healthy environment.”

Equally important, Resident Ambassador of the Republic of China (Taiwan) to St. Kitts and Nevis, His Excellency Michael C.H. Lin (LIN, Chau Horng) thanked everyone for celebrating with Taiwan, adding that the cleanup served as a true example of continued cooperation.

“The beach cleanup… is a best example for our two countries’ common goals and continued joint efforts to build a better environment for the future generations. The cooperation between Taiwan and St. Kitts and Nevis has been expanding its scope and bearing fruits in more and more areas,” said Ambassador Lin. “I would like to thank you for joining Taiwan on such an important occasion, as well as for the rock-solid friendship.”

The first beach cleanup was held on October 03, 2020, at Timothy Beach. The event was organized by the Embassy of the Republic of China (Taiwan) in partnership with the Ministry of Tourism, Sustainable Destination Council and the Department of Environment.

This year’s event was attended by other Members of Parliament including Deputy Prime Minister, the Honourable Shawn Richards; the Honourable Eugene Hamilton; the Honourable Alexis Jeffers; Deputy Speaker in the National Assembly, Senator the Honourable Dr. Bernicia Nisbett; other government officials; the Right Excellent and Right Honourable Sir Kennedy A. Simmonds, the only living National Hero; and specially invited guests and members of the media.