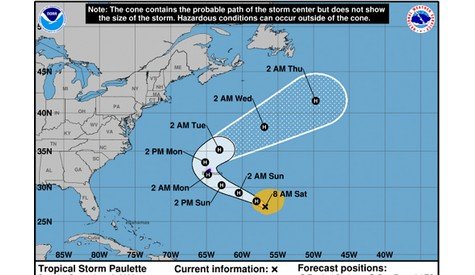 BRIDGETOWN, Barbados (CMC)— A hurricane watch has gone into effect for Bermuda as Tropical Storm Paulette moved northward over the Central Atlantic on Saturday and should bring hazardous conditions to the British Overseas Territory by Sunday night.

The Miami-based National Hurricane Center (NHC) said that the storm was located about 590 miles, south east of Bermuda with maximum sustained winds of 70 miles per hour (mph).

The NHC said that the centre of Tropical Storm Paulette was located near latitude 27.2 North, longitude 56.8 West and that it is moving toward the northwest near 16 mph.

“A west-northwestward or northwestward motion at a slightly slower forward speed is expected through the weekend, followed by a turn toward the northwest and north-northwest on Monday and Monday evening. The centre of Paulette is forecast to move near Bermuda Sunday night and Monday,” it added.

It said that the maximum sustained winds are near 70 mph with higher gusts and strengthening is anticipated, and Paulette is forecast to become a hurricane later on Saturday.

“Tropical storm conditions are expected to begin to affect Bermuda and the nearby waters by Sunday night. Hurricane conditions could begin in that area Sunday night or early Monday,” the NHC said, adding “Paulette may bring periods of heavy rain to Bermuda through Monday, with rainfall accumulations of two to four inches with maximum amounts of six inches possible.”

The NHC said swells generated by Paulette are affecting portions of the Leeward Islands and will continue to spread westward to portions of the Greater Antilles, Bahamas, Bermuda, and the southeastern United States this weekend.